The Ammo, Pyranha’s current ‘all-around river runner’ offering, is a fun mix of shortened river-runner and surfable hull&chines. It sports the high volume one would expect in a creeker, but is significantly shorter.

At first visual inspection, the Ammo looked to me like the design folks tried to mate up the side-to-side profile of the burn with lines vaguely reminiscent of the venerable Attak. Whether it’s a pumped-up, modernized Attak with good outfitting, or a sawed-off burn, the Ammo is a driver’s boat- nimble, fun, and corky… But it’s neither of the aforementioned boats - The Ammo is its own thing.

After looking at the boat for 5 seconds, I determined that it’s testing grounds would be on something creeky - it looks like a shortened version of a creeker, and from the look of it, it will excel in low-volume, tight-quarters technical waters… grand, then, that I took it out on something pushy, with high volume and munchy holes, just to round out the review process. 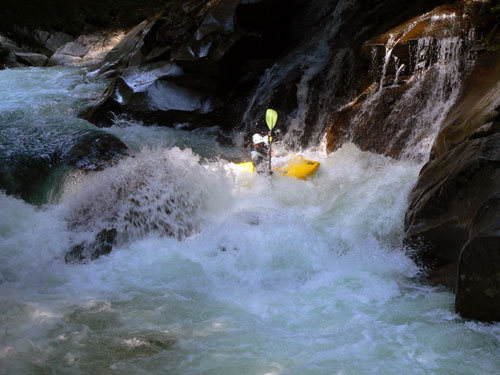 For my review sample, I paddled the Medium. I’m 6’1” and tip the scales at 190lbs without gear- meaning I’m near the high end of the recommended weight range for the boat when all my gear is included (note that the recommended load range figures include gear). I mostly took it on pushy, high-volume class V.

On the water, the Ammo is comfortable, laterally stable, and nimble, albeit slow in a straight line compared to its longer brethren. Its shortened waterline and large central volume make it corky and easy to boss around, but by the same token, the high sidewalls and volume make it easy for the river to boss it (and you) around, too. The result is a boat that rewards active driving, and because it’s so nimble, it calls for a degree of subtlety as well. 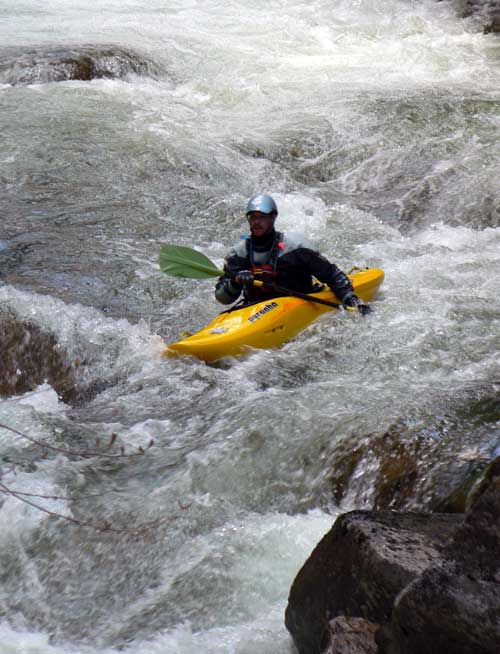 Pyranha’s marketing spiel is that this would be your all-around boat; good for play, running rivers… and they’re right- but there’s a dark side to this outlook, too. Yes, it’ll surf and spin and carve, and there is enough volume to float you and a bit of gear… but this is not a playboat by any means and its hauling capacity is pretty limited. As with any boat its length, adding much weight into the stern (the only space available for storage) will impact the way it trims out, so pack light. This is a river runner with the right lineage to do well on the steeps, and the right hull to spin and carve, but for vertical play? 64 gallons in a 7’2” boat is a lot of volume to play with- I found the ends decidedly buoyant. The Ammo is a compromise of many things, meaning it’s not optimal for everything, but it’s a rather good compromise. You really can take this boat anywhere, just don’t expect to throw down with the playboaters in their destination boats, and realize that running this boat down the steep-n-nasty will require extra attention. 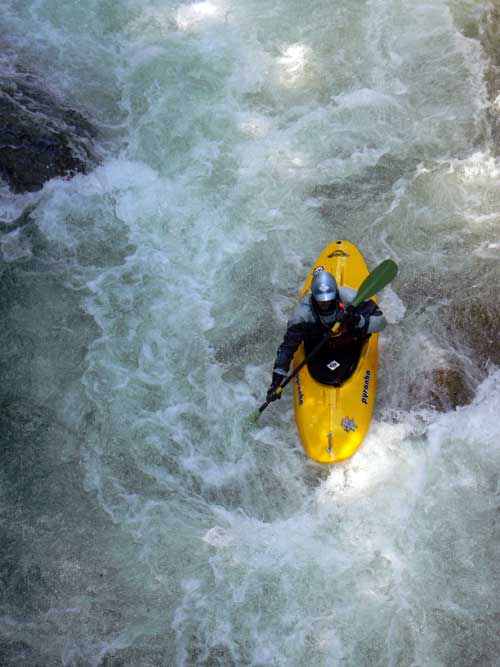 The rocker profile for the Ammo features a longish ‘flat’ hull section, with steeply progressive transition rocker toward the ends. This means as you activate that rocker at the ends, the resistance you get from the transition at the end of the rail falls off rapidly as you shift your weight across the transition. The result is that if you get your weight too far out to the end, it’s pretty easy to mush a carve, plug that hole, or find yourself on your stern, staring at the sky. You have so much influence over the orientation of this boat that you’ll discover how easy it is to over-muscle things.

Of course, that same quality makes the Ammo easy to boof. The short rocker-transition (and short overall length) gives you a lot of control over the boat, but with that control comes a certain responsibility for your actions. Where longer boats with smoother rocker transitions provide an ‘automatic’ leverage against your center of gravity to moderate your worst impulses, the Ammo is decidedly manual. 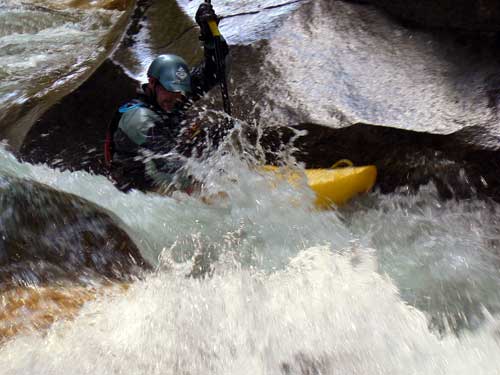 I found this to mean that if I got the boat flat on boofs, the landings were solid and I’d skip away across the surface of the water with speed- but if I relied on the transition rocker at the bow to do my deflection for me, speed would suffer- because of the blunt transition rocker, the line between deflecting along the surface and plugging underwater is a fine one. 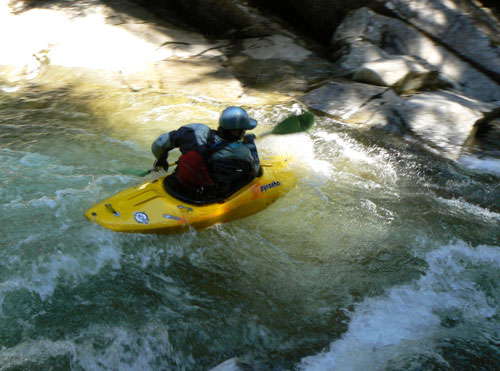 In pushy water, I found the Ammo easy to orient, but challenging to build and carry speed with. Getting used to the feel of the shorter rails helped with this significantly- as does the practice of actively driving the boat. Quick to accelerate but with low top speed, quick to plane up but with a short carving rail, I found it great for playing off of whatever feature I had handy- surf the lateral to make that cross-current move, for example, became a great game- but turning a carve into lateral speed required some finesse- with a carving rail this short, it’s easier than one might think to set an angle of attack that will stall. Fortunately, the Ammo is quick to square up to anything, and adroitly stays on top of the water. 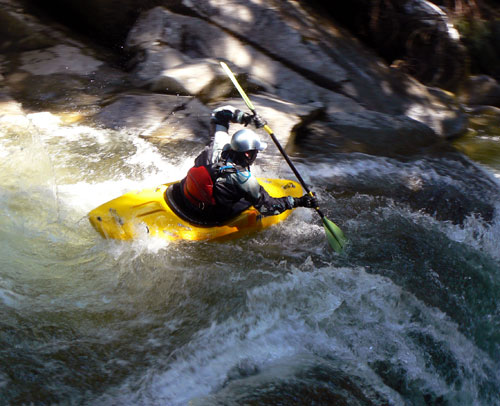 …of course, that’s a kind way of saying that this boat is retentive. Short, round in most aspects, with high volume, its bob-rate is so high that it’ll resurface very quickly- yep, a sure recipe for sticking in holes. It’s short enough that it’s a hole-tumbler, and voluminous enough to give you a lot of pop and bounce while you’re there… but the volume is distributed all the way to the ends, which means most of your slice-and-reorient-in-the-hole moves will require a lot of power. …simply put, if you’re getting cartwheels in this boat, it’s because you’re somewhere that’d make most strong men cry like sissies. Don’t ask how I found that out.

If you’ve sat in any modern Pyranha boat, you’ve experienced the butt-hugging goodness of their outfitting, which seems to become incrementally better every season. This version is no different, in this sense- it is the expected evolution of prior outfitting, something Pyranha seems to have down in spades. The backband connects to ratchet-bands in the thigh hooks, the foot-bulkhead provides solid footing, and I was able to set up this boat for my use without any tools. Additionally, the boat comes with a generous bag of foam for outfitting. 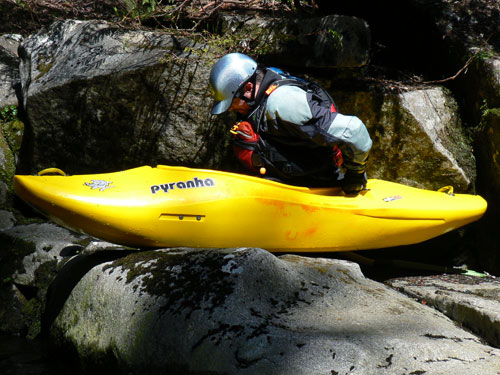 The cockpit is generous. I have a 32” inseam and size 9 feet, and I wore shoes (not slippers or booties) during the review, and had several notches to give in the footwell.

I found that by shortening the backband and moving forward in the boat, handling improved and my ability to punch through oncoming features improved significantly.

All told, the Ammo is a fun all-arounder that delivers on its promises. Superior outfitting, solid construction, the best parts of its elder brethren, all smashed into a fun little package means fun for you. Don’t expect it to keep up with full-on creekers or to play alongside destination boats - expect to go anywhere and do pretty much anything reasonably well, though.

I’m 6’1”, 190lbs (that’s 186cm, 87kg) and am primarily a creekboater, though I know my way around a playspot. I live in the Pacific Northwest, and have been hitting the creeks in WA and BC for the last decade.