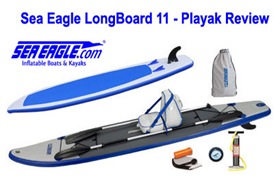 An independent Playak review of the Sea Eagle LB11, an inflatable SUP board.

The Sea Eagle LB11 (11ft Long Board) is a recreational inflatable stand-up paddle board. The manufacturer describes it as follows: “This versatile inflatable paddle board can be enjoyed either standing up or sitting down. Despite being inflatable, the high air pressure makes it as rigid and maneuverable as a fiberglass board!”.

The board comes in two packages: Start Up and Deluxe. The Start Up package comes with an aluminum/nylon break down SUP paddle, and the Deluxe package also includes an inflatable seat and a break down kayak paddle.  I tested the board on flatwater and easy whitewater in Switzerland, mostly for fitness training (paddling upstream). Below are some photos of the test environment: 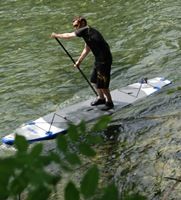 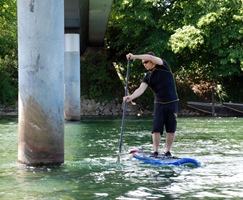 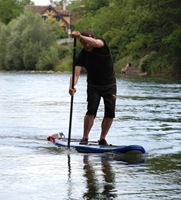 This was my first board ever, so I started as a complete novice and after half a year (70 hours of paddling), I dare call myself an intermediate level SUPer :)

What I really like about the LB11 is its weight - the board is very easy to carry around. When deflated the board can be stored in the included carrying bag, which makes it easy to transport. The pump has two speeds/pressure methods: first you use the high speed mode, and as soon as it appears fully inflated you switch to the high pressure mode. It’s not much work, but I’m lazy, and since I typically go for a one hour work out on the river in my back yard, I always leave it inflated.

The top and bottom of the board are connected by thousands of nylon cross hairs, which give the board more rigidity. I wouldn’t call it as stiff as an epoxy board, but it’s stiffer than most people would expect from an inflatable. The floppiness makes the board a bit slower, but the LB11 is long and not too wide, so all in all the speed in satisfying.

Another advantage of an inflatable board is that it’s soft to fall on. I use it on shallow rocky water, so it’s often safer to fall on the board than into the water. Especially when you fall because the fin catches a rock, you know for sure that the water is shallow and the landing in it would be hard, but you’ll automatically fall forward and it’s reassuring to know that the landing will be soft. Also, a friend of mine noticed that practicing yoga headstands is safer on an inflatable, as you’ll typically fall with your back onto the board in the beginning. 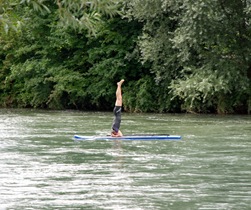 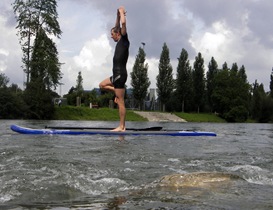 The LB11 has negative rocker, which seems to ‘suck’ and make the board slower than necessary. I originally assumed that the negative rocker was to compensate for the weight of the paddler: since the board is not 100% stiff, the board will be flat when the paddler stands on it. I’m not so sure about that theory anymore though after looking at some photos on the Sea Eagle web site, on which the boards seem to have regular rocker. Compare the following photos: the first two are my LB11, and the second two are photos from Sea Eagle. Maybe it’s just my LB11 that has negative rocker…

When standing on the tail to do quick turns, the floppiness of the board combined with the negative rocker means it’s difficult to lift the bow out of the water to initiate the turn.

You don’t want to use the LB11 on serious whitewater – it’s narrow and correspondingly tricky to balance in serious currents – but on WW-I+ it’s a lot of fun and stable. See also the following photo (one foot paddling is a great exercise btw). 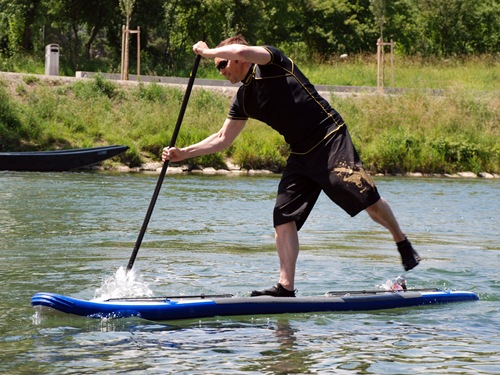 An inflatable board is more vulnerable than a plastic board (think rocks, fish hooks, paddle, storage), but it can be repaired easily and the LB11 comes with a good repair kit. On my second day, I managed to make a small hole on the side by dragging the folded board over concrete while trying to store it in my tiny basement. I fixed the hole with the repair kit and haven’t had to use that kit again. The carrying handle in the center of the board is very handy. The handle is located a tiny bit too far towards the front of the board, which means you run the risk of dragging the tail over the ground when carrying it. To compensate this, one can hold the handle a bit further back and squeeze the board between arm and body, but this is all a bit tiring and hurts your fingers. Not a big deal, as long as you don’t have to carry the board too far, but moving the carrying handle an inch backwards would be a simple improvement for a future version.

The elastic deck lines and metal deck rings are very handy. I clip my drinks to them and use them to store the paddle during transport. 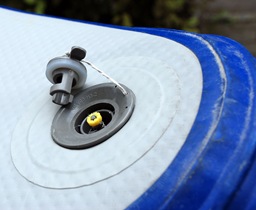 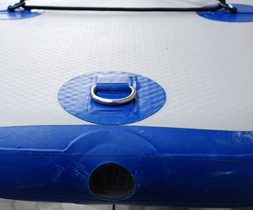 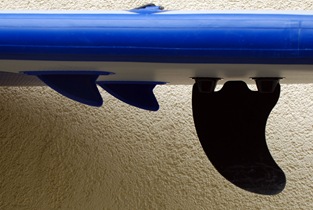 The board has three fins, two small ones on the sides, and a large one in the center. The center fin can be removed when the board is deflated, which is required to save space and protect the board when rolling it up. The two small fins are glued to the board and can be protected from them by two small inflatable tubes. I’ve tried the LB11 without the center fin as well, which works great for paddling on moving water, as it makes the board a lot easier to maneuver. I paddle mostly upstream in a straight line though, and don’t like to change paddle sides on every second stroke. Without the fin, this meant that the board is mostly moving diagonally, so I limited it to a one day trial.

The included break down paddles have aluminum shafts and nylon blades. They are perfect for the recreational use they are meant for, but since I also happen to have a carbon paddle, that’s what you’ll see on most photos in this article. For completeness, here’s a photo of myself with the aluminum paddle (on a cold day in November). 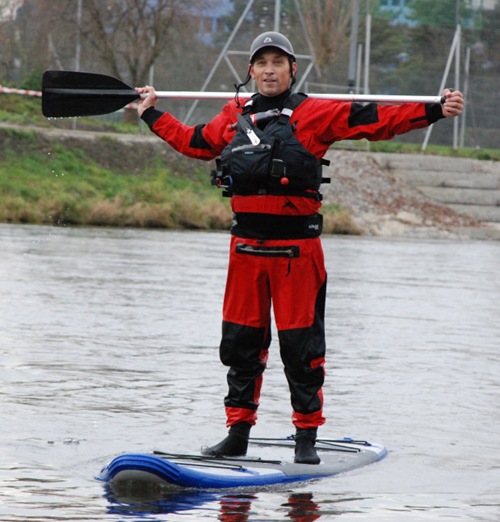 The Sea Eagle LB11 is an affordable SUP board, great for recreational use and fitness training. It’s all a compromise between price, performance and weight, but it’s a great compromise.