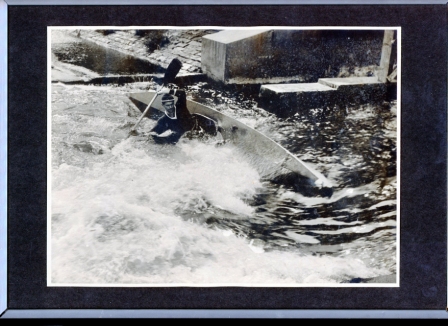 "It's a great batch of honorees and paddlers that we're paying homage to this year,"

The International Whitewater Hall of Fame recently announced its 2013 class of honorees, bestowing kudos on everyone from explorers to boat builders and even a Czech slalom racer who defected to the U.S. and brought along a popular paddling stroke with him....

The Whitewater Hall of Fame also invites everyone to come to its 2013 Induction Ceremony to take place October 3, 2013, at 6pm at the PaddleExpo (formerly Kanumesse) tradeshow in Nuremberg Germany.

"It's a great batch of honorees and paddlers that we're paying homage to this year," says IWHOF board chair Risa Shimoda, a recipient of the award in 2010. "We want to thank all the IWHOF electorate who voted in the ballot process. It's a great program. The competition was steep this year and congratulations to all our finalists."
And now, the drumroll for short bios on the winners:

ADVOCATE: Ramon S. Eaton (deceased)
Ramon (Ray) Eaton was an outstanding leader of networking among paddlers from the 195's through the 1970s. As Vice President of the American Red Cross, his knowledge and expertise in whitewater instruction and safety influenced ARC's role and involvement in whitewater canoeing and safety.
FULL BIO HERE

CHAMPION: Milo Duffek (Switzerland)
Milo Duffek was one of the first paddlers to escape communist Czechoslovakia for the west, setting the pattern of frequent international migration that is central to the paddlesport community. Historian Bill Endicott writes: "Duffek never won a gold medal. In Merano Italy at the Worlds he won something even more precious: His Freedom."
[mail address protected from spambots with javascript] &l=1106385_HTML&u=233397934∣=10062247&jb=0&utm_medium=Email&utm_source=ExactTarget&utm_campaign=
" target="_blank">FULL BIO HERE

EXPLORER: Peter Knowles
Peter Knowles (a.k.a. Slime) has dedicated his life to whitewater, conducting expeditions around the world since his earliest big river experience on the Grand Canyon in 1979. He is held with the utmost respect and has paddled with many of the other major expedition paddlers and explorers of the time including fellow British explorer-paddlers Mike Jones, Mick Hopkinson, and Dave Manby.
FULL BIO HERE

PIONEER: Graham Mackereth
Graham has been a major contributor to the success of the whitewater paddlesports industry worldwide and involved in designing and building kayaks commercially for more than 40 years. Pyranha's motto "For Enthusiasts, By Enthusiasts" sums up the essence of the company.
[mail address protected from spambots with javascript] &l=1106385_HTML&u=233397938∣=10062247&jb=0&utm_medium=Email&utm_source=ExactTarget&utm_campaign=
" target="_blank">FULL BIO HERE