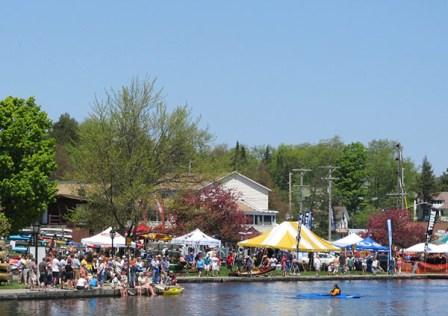 Leisure Trends: Paddlesport Sales Surge 14% in 2012
Okay, okay. We know you'd rather read about boating than business. But all that good weather we had in 2012? While it might have wreaked havoc on ski resorts, the balmy conditions proved a boon for boating business. Read on to see to how the year fared according to Leisure Trends Group...

According to Boulder Colo.'s Leisure Trends, the paddlesport friendly weather for 2012 translated into a record setting year. And your purchases (shameless plug: especially to Paddling Life advertisers) helped.

The group reports that full year dollar sales in boats, apparel and accessories popped 14 percent to $434 million across all three sales channels - specialty stores, chain stores and Internet - over numbers seen in 2011. Most of it is credited to the tides of an economic recovery as well as a weather pattern that had people thinking about paddling instead of Old Man Winter.

"Things went well for us in 2012," affirms Darren Bush, owner of Rutabaga in Madison, Wis. "We weren't up14 percent, but I don't think that number is right, if my contacts in the other specialties in the industry are any indication."

According to Leisure Trends, December 2012 paddlesport sales reached $19 million across the core channels, a 5 percent boost over a record setting December 2011. Chain ($3.6 million, +8 percent) and specialty ($12 million, 1 percent) both recorded gains, however, the lion's share of the growth came from online sales, which were up 21 percent to $3 million.

This late-year push is a positive harbinger heading into the 2013 buying season.

"So far we're ahead of projections for 2013 so it bodes well for our industry," Bush adds. "Canoecopia space is sold out with a waiting list, and we're selling a record number of advance tickets."

The only real downtick, he adds, is canoe sales, which continue to be flat. "But they are cyclical so we may see a good year for them," Bush says. "Kayaks continue to do very well. Composite kayaks are soft overall but some of the models are on fire, so it's really brand sensitive."

On the high-end side, he adds that some kayaks are approaching the $4,000 and over mark, which can be a big psychological barrier for buyers. "Plus they last so long that people don't need to upgrade that often," he says.

"Our 2013 pre-season orders are up by double digits over our 2012 pre-season numbers," says Confluence director fo sales nad marketing Cheri McKenzie, whose brands include Perception, WaveSport, Dagger, Wilderness Systems, Mad River, Bomber Gear, Harmony and more. "For us, new product innovation is driving the growth, including our new Phase 3 Air Pro outfitting for Wilderness Systems and new whitewater outfitting systems for both Dagger and Wave Sport.

Accessory sales are also up substantially, she adds, driven by Harmony and Bomber Gear.

As for boat sales, she says that they're seeing significant increases in all of the company's core brands: Dagger, Perception and Wilderness Systems.

"All the categories had growth," she says. "And the most significant growth has come in sit-on-tops."