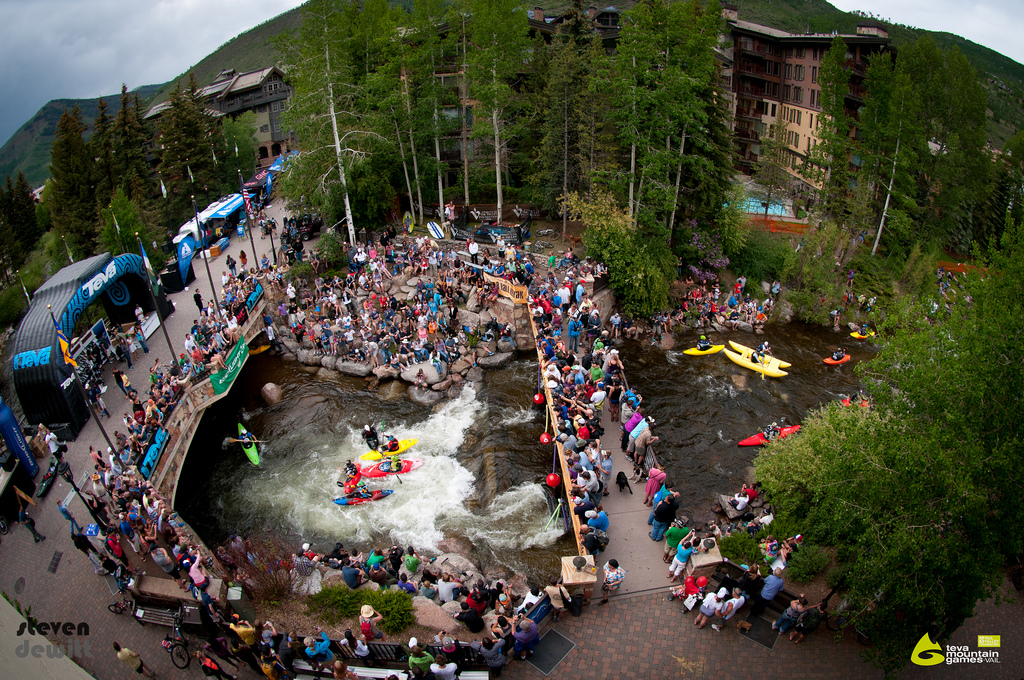 "This summer, a new era will begin for the Vail Valley Foundation's Summer Mountain Games, as POV action sports camera pioneer and now industry icon GoPro becomes title sponsor of this premier celebration of paddling and other mountain sports."

After this winter's pullout by Teva of the Vail, Colo.-based Mountain Games, event organizers were left looking for a new title sponsor for the multi-sport bi-annual event.

And given the competition's strong paddling roots, it seems they've finally found a partner with as much cashé--and cash--as former 11-year sponsor Teva. Prior to that, as any true old-school boater will remember, the event was known as the Jeep Whitewater Festival.

This summer, a new era will begin for the Vail Valley Foundation's Summer Mountain Games, as POV (point of view) action sports camera pioneer and now industry icon GoPro becomes title sponsor of this premier celebration of paddling and other mountain sports.
Event organizers and GoPro have agreed to a long-term partnership, placing the company as the title sponsor for what has become one of the worlds premier celebrations of mountain sport, lifestyle and music.

Initially created in 2002, the Mountain Games has grown to currently host approximately 3,000 adventure athletes in eight sports, while also attracting nearly 50,000 spectators annually for the four-day event. The 2013 Summer GoPro Mountain Games are slated for June 6-9.

We are very excited to not only continue our partnership with GoPro, but to be able to take it to a new level, explained Ceil Folz, president of the Vail Valley Foundation. Teva, the previous Mountain Games sponsor, was a positive, driving force for the event and we thank them for their long-standing partnership and wish them well in their future business endeavors.

Signing on as title sponsor of the 2013 Summer Mountain Games is a testament to our great partnership with Vail Valley Foundation, and we look forward to working with them to bring the community of Vail, and Colorado as a whole, the best Mountain Games yet, said Paul Crandell of GoPro.

The Vail Valley Foundation also successfully transitioned the summer model to winter with the creation of the Winter Mountain Games, presented by Eddie Bauer, which wrapped up last week.

Based in San Mateo, Calif., GoPro, maker of one of the worlds most versatile and popular POV cameras, has sold product through 30,000 leading specialty retailers in more than 100 countries around the world.

Not only are we seeing new events being added to the Mountain Games, but we are enjoying the Vail Valley being exposed to an even larger international crowd via the Games as well as a new and dynamic media landscape that has evolved through the event, Folz continued. "GoPro brings the athletes-eye perspective to the event and will obviously play an integral role in helping us bring the story of the Mountain Games to an even larger global audience.

For additional information on the Mountain Games, visit MountainGames.com.

--Aaron H. Bible
Paddling Life News on Playak is © and presented by:

The 10’6 Atlantic Paddle Board, with its molded composite ABS deck is an all new SUP concept from Scott Burke Surf and it's about as durable as they...

Join us on each episode of Immersed TV to see Zane's Blue Life Tips. This time Zane Schweitzer brings you a minute look at how you can help the...

For me at 6ft 170lbs the Medium Ozone fit perfect. It was a really nice, fast, loose hull. This looks a lot like the Jed hull just stretched out...

Welcome to the SUPPAUL Podcast. This is a conversation about adventure travel, content creation, and running rivers. During the coronavirus...