Almost 3000 people voted for what they considered the 'Most Promising new Kayak Brand'. Of course, one should always take care when interpreting such results. Many people just vote for the brand that:

to name but a few reasons. Still, with 3000 people voting, the results are interesting enough to publish them.

The final top 5 ranking is:

I am very happy that I was chosen as the most promising brand. Some reasons for winning may be: 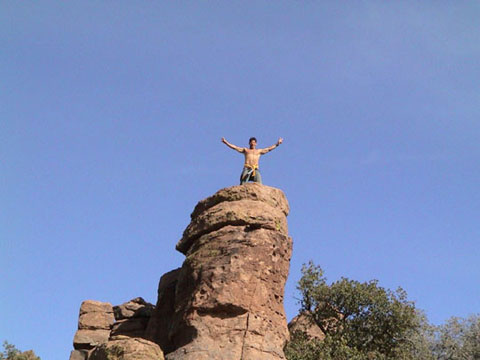 The complete Jackson Kayak hasn't been seen by your readers yet. They have only seen the kids boat, and the Fun Series. Now, they are seeing the All-Star for the first time, while the Star, and Super Star are still just coming out. The Creeking part of Jackson Kayak is unknown to your readers so far and that will blow people away. Our Rocker will put the nail in the coffin of any doubts about our commitment to making a great product line. We will do much better in 2005 in this poll, I am guessing.

Looking back on the short company history, the most important thing I learned is that everybody who ever said dedicating your life to kayaking is a dead end street, was wrong, and that kayaking can be a lifestyle, a recreation, a sport, and a living all at the same time, and that there is no better way to live, in my opinion. When I was under the management of non-kayakers, it took much of the fun away. I learned that something that is quite time consuming, can also be quite fun!

For next year, expect from Jackson Kayak 12 of the best boats to ever make up a kayak brand. A size for everybody, prices that are fair, more innovation, and a general movement in the direction of better in all areas. I have been number one in many areas over the years, but it is the striving to get better that keeps me progressing and in the game. Not once have I looked at my top position and said- "I've made it." Instead, I immediately want to help others get there, but be even further along by the time they are there- on the wave- but already dropped in.

I e xpected to reach position X, because lots of paddlers still don't know about us. Next year we should be on top of course, when more paddlers know about us and when we have more new boats on the market. Look out for our two creekboats that will be released early next year, they are awesome. Our river runners are also taking shape, pics will be released soon of prototypes in action.

These are about the results that I was expecting. Jackson Kayak targets the average paddler with a good product for a good price. It's a "family" run business which appeals to many people. Dragorossi on the other hand has produced almost no kayaks this year, so no one has really seen any in order to rate us (other than die hard fans of my past designs). I'd have been surprised by any other result than this one.

In sports people hate coming fourth. It means that the bronze was within the reach of your hand yet too far to actually get it.

Nonetheless we, Drakkar, are very proud to be fourth. Well, at least this time! There are three reasons behind it.

New models are being prepared. They should be ready in early 2005. So get prepared. Excitement? Huh, share it with us and make Oxford change the meaning of the entry in their dictionaries! As they say in boxing: "Always finish stronger than your opponent..."

The companies that were part of this survey will all be established brands next year (if all goes according to plan of course :-) . I certainly wish them all a flourishing future.

If next year will see as many new kayak companies as this year did, we will certainly do a similar poll again. It doesn't seem very likely to me though, as I'm not sure how many more manufacturers the worlds needs now that most niche markets (kids, high-end, ...) are taken care of. Anyway, I'm always open to surprises and the more brands and models, the more choice for us paddlers!