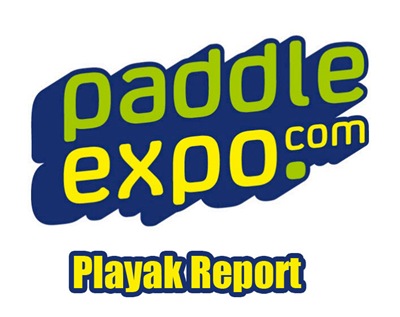 Photos and thoughts about the Paddle Expo 2012 in Nuremberg from a sea kayaking perspective.

An apt description of the sea kayak developments on the 2012 edition of the international paddle sports show in Nuremberg is “Evolution and Refinement”. The sea kayak exhibitors didn’t bring real sensational new products, but they did show a steady development of their line ups. The major trends of the last few years have been continued:

Below are some photo impressions and corresponding thoughts and comments. 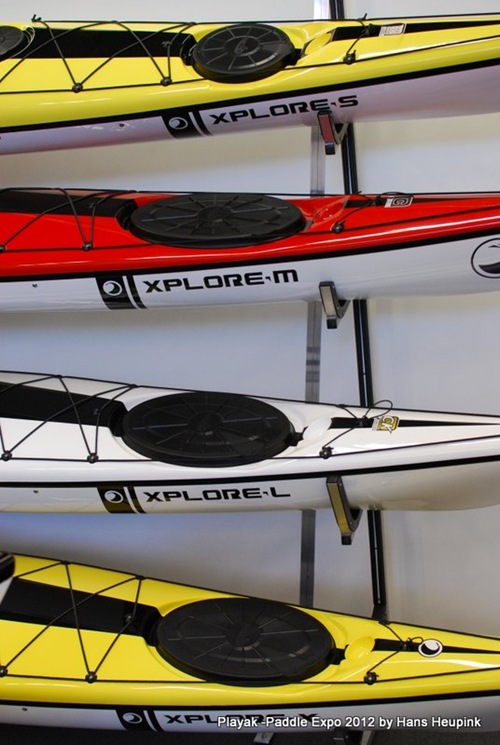 The Tiderace range of kayaks is grouped into three design families of Touring, Play and Racing, which are now all available in multiple sizes. New for 2013, but alas not present on the show, is the Vortex. This is Tiderace's first rotomolded (RM) sea kayak. It's a short, nimble and stable sea kayak designed for “playing the sea”. 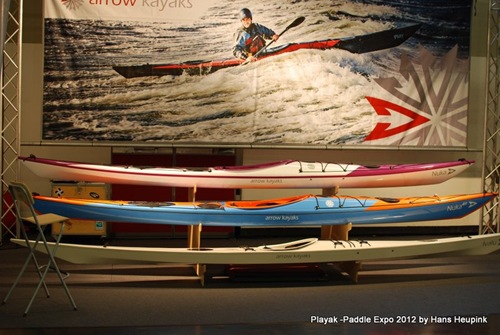 The Arrow Nuka is the smaller sibling of the Play models. Nuka and Play are both kayaks designed for, maneuvering & playing in the sea and offer also a good platform for day trips or longer overnight getaways. The new GT is a touring version of the Nuka. It has a different deck line layout. The rear hatch is oval, making it easier to load the kayak. The hull of the GT is more speed orientated with less rocker and softer chine and a lightly longer waterline. 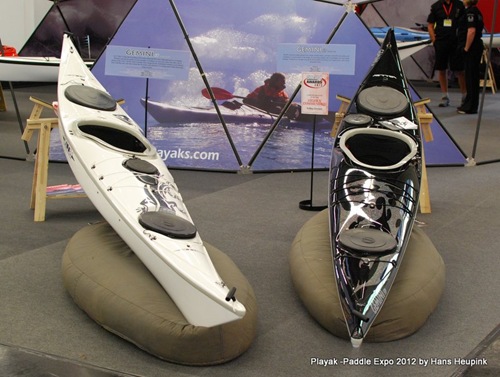 Valley has added 2 short (14 feet 10 inches) kayaks to their range of sea kayaks. The Gemini Twins ST&SP are developed as a pair of kayaks with different characteristics. The ST is designed as a short boat that handles like a longer sea kayak but is easier to manage off the water. The SP optimized for performance in rough water with an increased rocker, greater bow volume, harder chines a flatter mid-hull cross-section and a stronger lay-up. 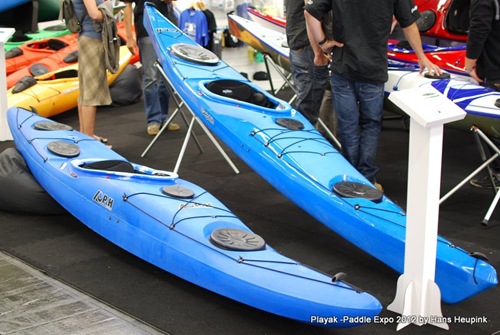 The new P&H Hammer is presented as a new generation of sea playboat “…that will take playing at the sea to a new level.” The influence of the Pyranha (the owner of P&H) whitewater designs is obvious. The Hammer is a very welcome, modern reincarnation of the old school whitewater kayaks of the 80’s and must be great fun to paddle in rock gardens, tidal races and surf zones! 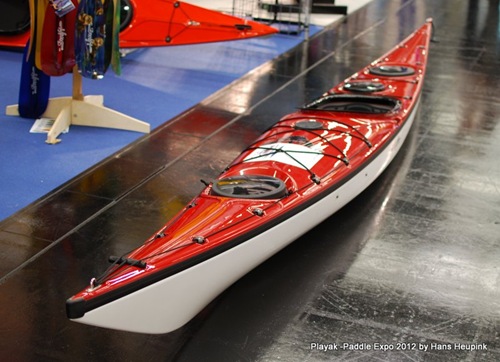 The new Eddyline Raven, designed by ACA L-5 Coastal Kayak Instructor Chris Mitchell features a raking bow and stern, hard chines in the mid-ship and well balanced to provide a "neutral" trim, creating a boat that should be quick and crisp handling in all conditions. Like all Eddyline kayaks, the Raven is made from Carbonlite 2000, a high performance co-extruded plastic laminate that is extremely tough, but it is also easily repaired in the event of an accident. 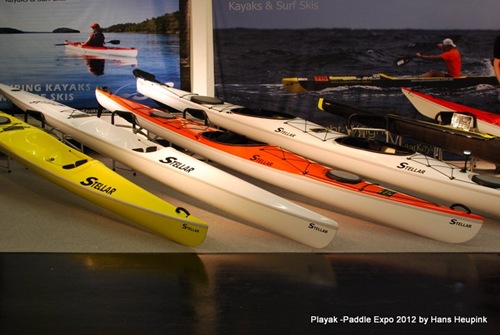 Stellar Kayaks from China is known for a wide range of surf ski's and speed orientated touring kayaks. For 2013 their range is extended with more “British Style” sea kayaks, equipped with a skeg and a stable, maneuverable hull design. 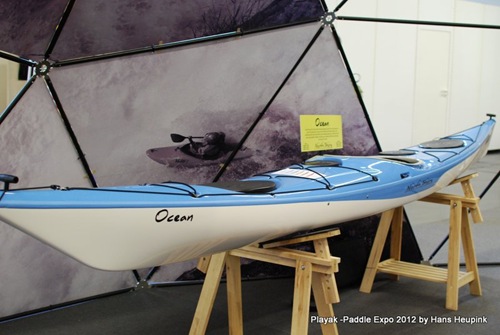 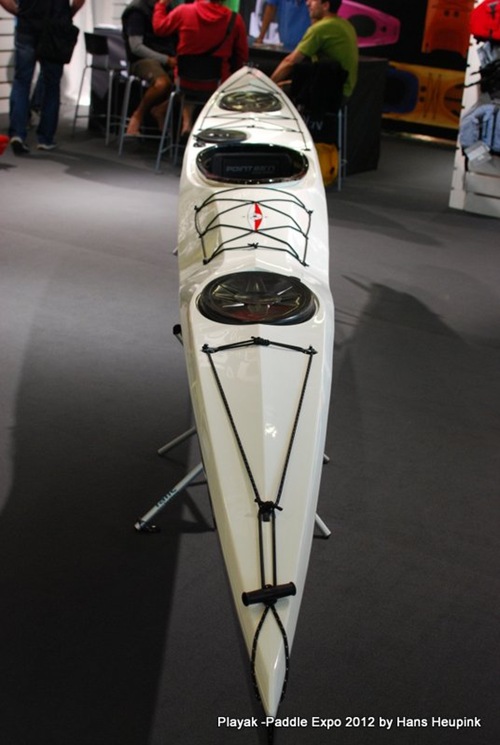 Point 65 showed a production ready prototype of the “Freya”. This kayak is custom designed in collaboration with Swedish designer Magnus de Brito for the second leg of Freya Hoffmeister’s South America’s expedition. It is designed to consume miles of paddling with ease and speed while being safe, comfortable and stable in the worst and scariest conditions. Although there is some optical resemblance with the Point65 XP18 touring kayak, the Freya is a completely new design with a hull shape that comes closer to Epic’s Surf ski - the Bourbon Orca. 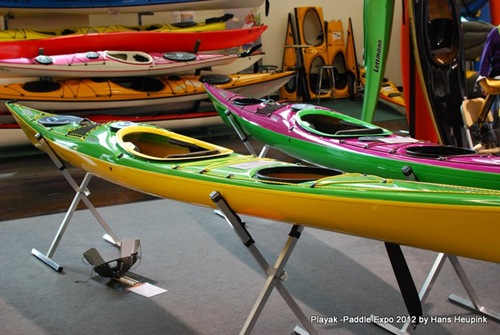 The Biskaya is the latest sea kayak of German producer Lettmann. The kayak is available in several volumes (and very bold colors) and equipped with the latest version of the continuously optimized Lettmann Ergo Rudder/Skeg system. 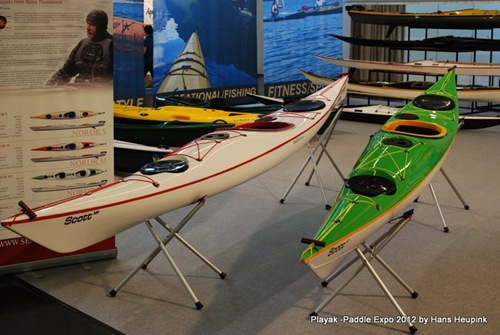 Seabird is now also cooperating with Rob Feloy (the designer of the legendary fast Inuk sea kayak). The new Seabird Inuk was not ready for the show yet, but the surprise on the Kanumesse were two new kayaks designed by Rob: the Scott MV and the Scott LV, nice looking British Style kayaks. 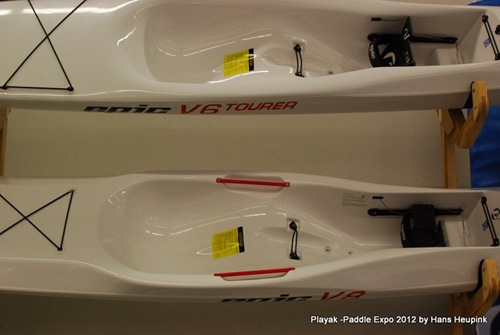 Oscar Chalupsky was present at the Kanumesse to promote the increasing range of Epic surf skis. The Epic V6 and V8 are bridging the gap between touring or sea kayaks and surf skis. 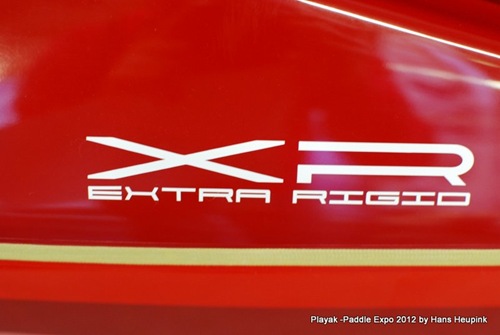 As an example for the different constructions that a lot of manufactures offer: Skim Kayaks are available in 3 different lay-ups: TR-Traditional lay up (Polyester/Diolen and fiber glass), XR-Extra Rigid (Vinylester/carbon/Kevlar/glass fiber and diolen) and CL-Carbon light (hull of carbon fiber sandwich with diolen resin with a deck constructed in fiberglass and vinylester). XR is stronger than the TR and CL is just as strong as the XR but even lighter. A kayak that weights in TR 25 kg, weights 23.5 kg in the XR and 21.5 kg in the CL version. Costs go in the other direction upwards. 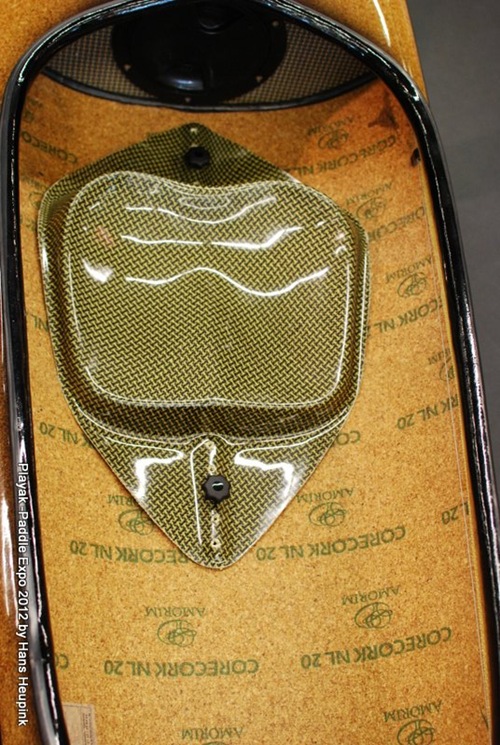 Neumann kayaks showed a line of cork-core kayaks: very light and very strong in a fascinating shiny finis. Willy Neumann tried to convince the public of the strength of this construction by jumping with his full weight on the deck of one of the fast , sleek and ultra light Neumann fitness kayaks. 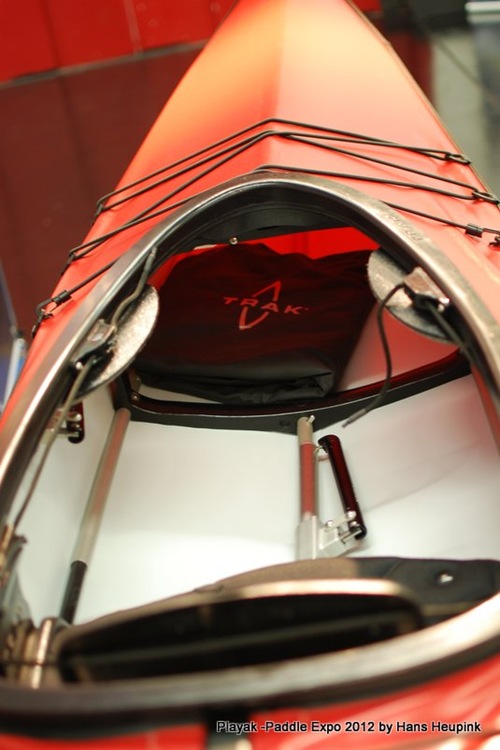 The Trak folding kayak isn’t new but is steadily being developed further in details. 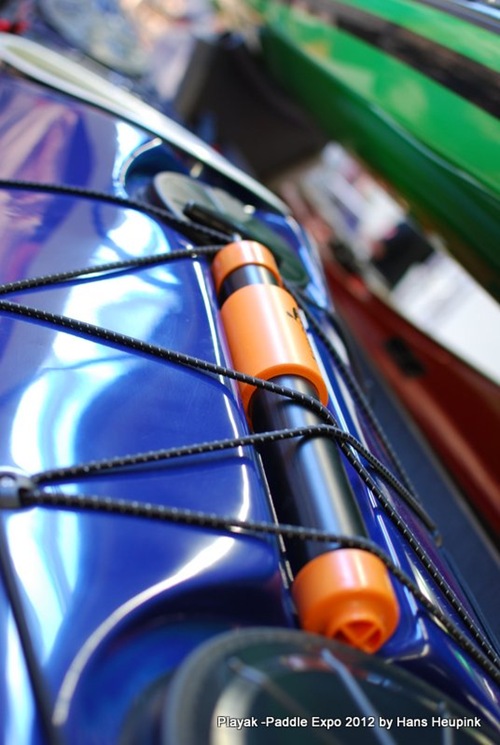 Attention for detail on this Skim Kayak with a deck recess where a bilge pump nicely fits in. 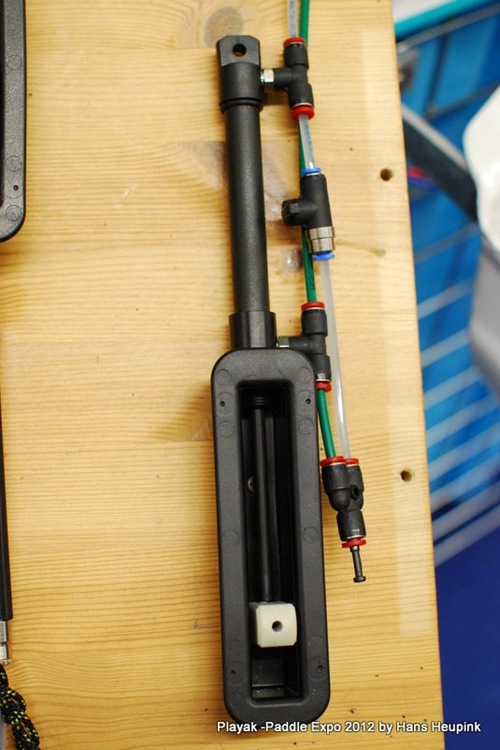 Geoff Turner, the man behind the Kari-Tek products, showed a further refinement of the ingenious Kari-Tek hydraulic skeg-rudder system, which is now completely made from ABS material – making it lighter and completely resistant to corrosion. 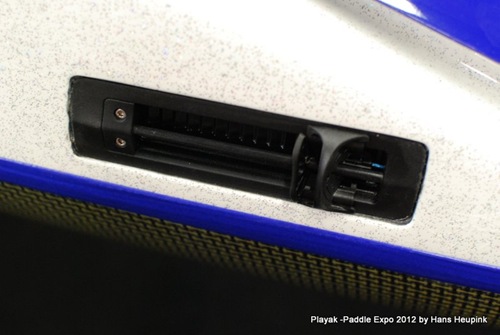 P&H has thoroughly revised their skeg system for 2013. There were quite some issues with the first generation with this system (introduced in 2009), which was improved over the years and while paddlers with issues were always supported by P&H. In the second generation the slider has a smoother, more intuitive action and can be more easily maintained to keep the action working consistently. 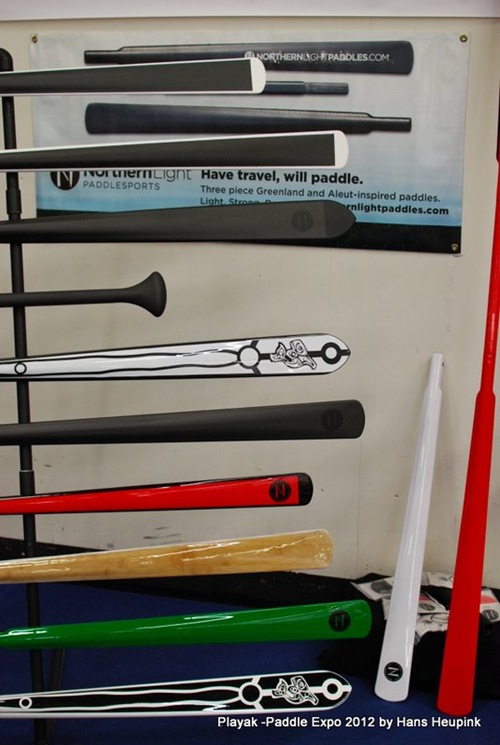 Northern Light Paddles was present on the show with a very colorful variation of their modular Greenland and Aleut carbon fiber paddles. The modular three-piece system allows Northern Light to scale paddles to length according to the center loom. It also features the option to assemble the paddle (without the center loom) as a short "Storm" paddle. 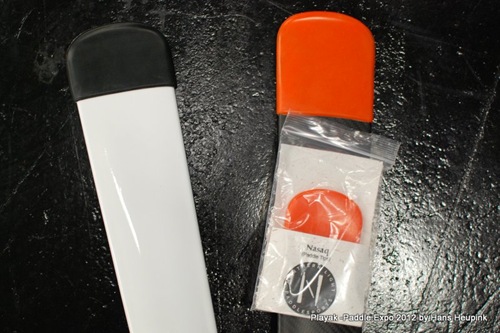 The Nasaq, by Northern Light Paddles, is a paddle tip cover made from a special UV-resistant formulation of silicone and urethane that stretches and conforms to the paddle tip shape, and provides a layer of protection from chipping, fraying or abrasion for those who paddle, land or launch from harsh beaches or ramps. The Nasaq is available in several colors and fits over most common Greenland style paddle tips.

Black Light Paddles makes fantastic high tech carbon Greenland Paddles with ultra thin blades and a sensational light weight of 550 grams. The standard Black Light Paddle is solid enough for expedition paddling, but requires careful handling. For the real rough stuff there is now the “Black Light Greenland Rough and Roll”, just as thin but in a stronger layup, with reinforced edges and blade tip. It weighs 700 gram.