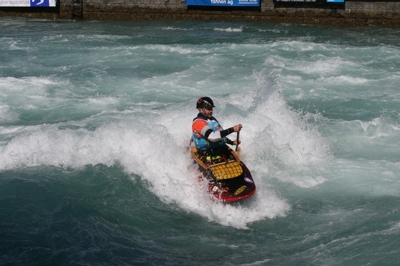 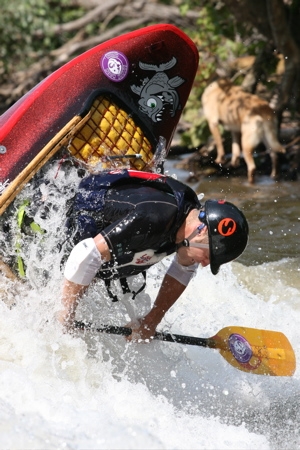 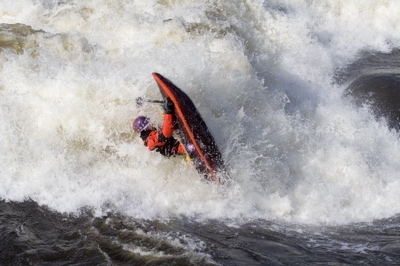 Address
Chasing Rain, LLC
Address (con.t)
2463 Freysville Rd
City / Town
Red Lion
US State / Canada Province
PA
ZIP / Postal Code
17356
Country
USA
Blackfly Canoes is really the confluence of several "projects" of mine. It's hard to say when and where it really began, since the Blackfly developed as a result of a few different things I'd been working on. Things that put me in a unique position to be able to pull this off.

The first key piece was learning to work with composite materials- shape a plug, build a mold, spray gelcoat, lay up parts, etc. I started fooling around with this when I was in grad school. It just seemed like something fun to try. I read whatever information I could get my hands on, listened to whoever was wiling to talk, and learned a lot by trial and error. I started out making helmets, since they were smaller, and therefore the mistakes were less expensive. After gaining some confidence with my skills, I started shaping the Maelstrom squirtboat, and built a prototype of that boat.

After finishing my Master's degree in 2005, I decided to take some time off to go paddle for a while. I bought a big van, and started picking up sponsorships, my first big one being Pyranha, and traveling the "rodeo circuit." During this time I met a lot of people and made a lot of friends who would be important in the development of Blackfly. I also began learning a good bit about boat design.

In 2006, I decided to train to try to qualify for the US Freestyle Team in C-1. I'd started paddling C-1 somewhat seriously a few years earlier under the mentorship and encouragement of Joe Stumpfel and Seth Chapelle. I figured that I wouldn't have a shot at the team in K-1, but if I trained hard enough, I'd have an outside shot at making it in C-1. I spent most of that summer on the Ottawa training in C-1 on the various waves the river has to offer.

I also brought my Spanishfly along for kicks, and to mix it up a bit when things got monotonous. When team trials rolled around, I missed the team in C-1 by one spot and a narrow point difference, but had also decided to compete in OC-1, if only to be another person in the class. No one else showed up, and I made the team by default.

Suddenly, I was faced with the issue of finding an open boat I wanted to paddle on Buseater the next spring. I looked around, tried a few boats, but none of the boats seemed quite right to me. The more recent designs seemed to have the issue that the ends were hard to keep up when the boat was full of water- making it hard to do more than one move, and hard to paddle back up the eddy- or down river. I wanted something that would be decent all around and that could do more than one move on the wave. I decided to design my own boat, based on a shortened Spanishfly.

The first version of the boat, dubbed the "Blackfly" was pretty unstable, slow and a bit too chunky in the ends, but I learned a lot from it, and won a bronze medal a the 2007 Worlds. I went into Worlds not having paddled the boat very much, and had very few expectations. I left feeling a bit like I "shoulda, coulda, woulda" won, but still happy to have a medal. I paddled the boat a fair amount that summer, and got a pretty good idea of how to improve on the design.

In 2009, I reworked the boat a good bit, and made a boat I was pretty happy with. I had a feeling it was my time to shine, and the boat was performing well for me. Even a few kayakers noticed. The second version of boat carried me to the top of the podium at the 2009 World Championships.

After the World Championships, I found myself in a unique situation. I had a boat design that was proven- and had essentially no competition on the market because the major manufacturers had decided not to support OC freestyle. The royalties from such a boat wouldn't have made if worthwhile pursuing with any of the established manufacturers; because the Blackfly was always a project for myself, there was a lot of work to be do get it ready for any sort of production. At the same time, my experience as a pro paddler gave me lots of connections with people who were willing to offer me advice and help in producing the boat, and a good bit of experience in marketing boats. My experience with composites gave me skills needed to produce a short-run mold for building the boats. With the small demand for such a boat, the cost of an aluminum mold would be prohibitive. And as a pro-paddler with no "real job," I had plenty of time to work on this project. It seemed logical to produce the boat myself.

And so, Blackfly Canoes was born. I re-worked the plug a bit to clean up the lines, make it more symmetrical, tweak the design a little bit, and correct for the shrinkage of molding it in plastic. I built a mold and found a molder nearby that was willing to work with me. Lots of long days have been put in, shaping, laying up, sourcing all the parts for the outfitting, dealing with logistics, molding boats, gluing foam, but Blackfly Canoes has become a reality, and there are plenty more long days to come. This is about the end of the first chapter in the Blackfly story. Where the story goes from here is yet to be determined- and largely depends on the response to the boats. Either way, it's going to be a fun ride.