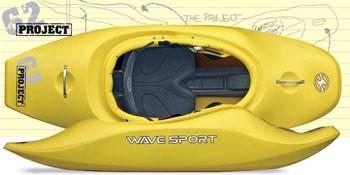 Refinement… The Project is a result of countless hours spent contemplating, visualizing, discussing, experimenting and testing all the little things most people don’t even notice about a kayak. Even the smallest change in chine angle, sidecut profile, volume distribution, rocker profile, and how these variables interact lead to dramatic changes in performance. By taking time to explore the details, we’ve discovered new ways to improve how a boat interacts with water, and you. The Project is a result of our commitment to the art of refinement. It combines a fast, loose hull that hops and carves with a deck profile designed to maximize pop while maintaining fluidity during linked vertical moves. With three sizes we’ve been able to increase comfort for a wider range of paddlers and raise the bar on performance. This project is now complete….

Got mine on sale i'm guessing since people are getting rid of em to get the X in when that comes out.

Affiliated
No
About Me
Been kayaking 13 years mostly whitewater some sea kayaking.
Pros / The Good
Turns on a dime pops extremely well i'm 100Kg and 190cm tall and it sits perfectly in the water and has ample room hmmm slices amazingly best boat i've ever owned.
Cons / The Bad
Didn't get one earlier and it clashes with the colour of my PFD lol other than that nothing get one while they're cheap.
Recommend
Yes
Comments (0)
Was this review helpful to you?
October 02, 2008 (Updated: October 02, 2008)

I've just returned to kayaking after a long time out of the sport. I.e. Can't do helix's or any of the new moves that people are naming that to me just look like going upside down and rolling in style.

Before I quit the sport I had been sponsored by; Wave Sport, Dagger, Pyranha, Mad Yaker then Lendal...to name a few.

Before having bought this boat second hand the owner told me his reason for selling it was becasue it was just too big to get any rodeo moves.

Then I asked another experienced paddler of a similar size and build what he thought; and he said it was just too big to do anything in it...

So when I got on the river and the lads asked me to do something with it I set my head to thinking "this is gonna need some oomph"....it didn't.

The first thing that will impress anyone around 6'4ft with size 12's is the comfort factor! This boat has ample room and I actually need to put some foam in if I'm to learn the new moves or run G5 in it. The seat is comfy and the boat is well shaped around the knee. The privious owner has removed the thigh grips but it seems to be fine without.

So the first deep bit of water I got it on. I cranked up and chucked the nose down....before I knew it the nose was down a second time then a third. Cartwheels are possible in this boat with out a paddle just using the edges and a lot of abs. it will flat water loop with ease and I have no doubt it will rock on a good wave....but there are no good waves on the North Esk.

For river running...it obviously sucks....or does it; it ferry glides fast, it turns fast, it resurfaces fast enough and it boofs very easily. I'd happily take it down the Morriston or the Orchy without portaging anything but in reality that's as far as I'd trust it.

I better say something negative about it.....I don't think wavesport have the best fittings on the market....but unlike those who say they do at least they dont break every five minutes.....

In conclusion, if you want a boat to learn most of the modern moves that is fast, comfy, short and predictable then you won't go wrong with this.

If you can't do the moves then it's you and not this boat...it really does rock...if I broke it I'd buy another one!

I LOVE this kayak. I actually picked it up for an absloute bargan as it was damaged in a tornado. Until I bought this boat I was never able to actually get vertical in flatwater, the P 62 changed everything! I can now double pump. bowstall (not for long yet) and the possibilities seem endless. The outfitting is top shelf! My feet do not go numb and the thigh braces get me in all the right places. So far I can not think of anything bad to say about this boat. i was not much of a playboater until I got into this kayak. That too has changed. I am now compelled to go bigger and try harder stuff.

Like any boat: Demo before you buy... But remember to Demo this kayak.

Affiliated
No
About Me
Location: Wausau, Wi
Age: 28
Weight: 113.4 kgs
Comments (0)
Was this review helpful to you?
Tweet