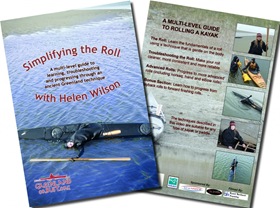 Simplifying the roll is an instructional DVD, presented as “a multilevel guide to learning, trouble shooting and progressing in kayak rolling through an ancient Greenland technique”. This Greenland-approach distinguishes the DVD from most other instructional “rolling DVD’s”. Words as “hip-snap” and “off side” aren’t used in this DVD. Helen Wilson chooses a more gentle approach, focusing on (the floatation of) the torso: it’s not the hip that rolls the kayak but the entire torso…

The picture on the cover of the DVD shows Helen in a tuiliq (= a traditional Greenlandic kayak-dress) in a sleek, hard-chined Greenland-style kayak with a Greenland stick, but Helen claims that the techniques described in this DVD are suitable for any type of kayak or paddle.

A revival of the traditional Inuit kayaking skills started about 25 years ago in the US and Greenland and has since then spread around the world. Rolling clinics at kayak-meetings and symposiums with talented coaches like Greg Stamer, Turner Wilson, Cherri Perry, Maligiaq Padilla, Dubside, Freya Hoffmeister and, in recent years, Helen Wilson contributed to the grown popularity of Greenland-style kayaking in popularity. Helen Wilson is a sea kayaker out of Arcata, California. She competed in the Greenland National Kayaking Championship in 2008 (Qaqortoq, Greenland) and 2010 (Nuuk, Greenland), receiving five medals in four disciplines. Helen performs rolling demonstrations, presentations and instructs at events in the USA, Canada, Iceland and europe, but she hasn’t been to the Netherlands yet. Whatever: now we can worldwide watch Helen doing her thing -on the DVD. 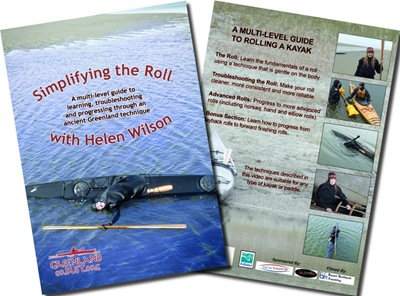 The DVD contains a short introduction, 3 chapters and a bonus section.

After the introduction the first chapter of 20 minutes guides you step by step to the standard Greenland roll. Helen’s approach is thoroughly. Every single aspect is covered: the knee-, shoulder- and head- position, where your hands need to be, the set up, the recovery and (finally) the complete roll. Interesting is that Helen starts with wet exercises without a kayak (= the human kayak, picture). In this chapter she progresses from the so called static balance brace to a complete standard Greenland roll .

The second chapter is called “Troubleshooting the roll” and looks at common problems associated with the roll, how to diagnose them and how to fix them. In 10 minutes some excellent tips pass by to clean up your roll and make it more reliable.

In the third chapter Helen presents a variation of backward-finishing Greenland-style rolls. All these rolls are based on the body mechanics of the balance brace and the standard Greenland roll. In the 13 minutes of this chapter, Helen shows you convincingly that it really doesn’t matter what you have in your hands: a paddle, a norsaq, simply nothing, or a brick… To be honest: not all of these rolls will be in reach for any paddler in any kayak though. Most will be, but for the really tricky ones like the elbow roll or the hand-spine roll (picture) not only a serious amount of flexibility and body-control is needed, but also a kayak with a very low back deck. 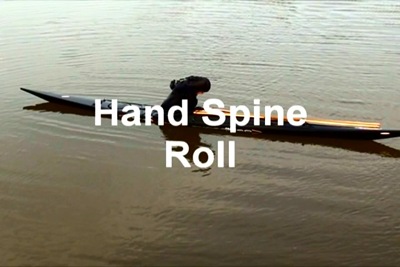 The unpolished character of this DVD is definitely part of its charm. The film-work is straight-forward and simple: all you see is Helen on the beach or Helen with her black Greenland kayak in the water. No flashy perspectives, no sophisticated underwater footage, no trendy music-tunes but mostly just the surf and sometimes the wind blowing a bit loud in the microphone. It’s pure. It will be precisely what you would experience when doing one of Helen’s rolling workshops. And this is impressive – Helen does one of the best introductions to the standard Greenland roll I have seen! Chapter 1 provides you exactly the crucial instruction necessary to learn the roll, all you need in addition is an extra helper in the water (perhaps a waterproof DVD-player will also be helpfull).
The troubleshooting chapter offers numerous highly valuable tips. Helen’s tip with the floppy head and the eye-brows under water is just brilliant! Just looking at Helens’ graceful performance of the advanced rolls in chapter 3 is a pleasure and it also offers a nice introduction to the fascinating world of Greenland competition rolling. The bonus section with the forward finishing roll is mainly a teaser. It’s a good idea to show the difference between the backward finishing rolls and the forward finishing rolls, with the tips of Helen you can progress to the storm roll. But with only 2 minutes it’s a very short chapter, while there is much more to learn about the forward finishing rolls. I think we know what Helen’s next DVD covers…

Enthusiastic as I am about the instructions of Helen on this DVD, I do have 2 issues to niggle about. The first regards Helen’s claim that the techniques on this DVD “apply to any kind of kayak and paddle”. It was this point where I had high expectations of Helen’s DVD. It’s a missed opportunity that Helen demonstrates all the techniques with a wooden Greenland stick in a Greenland style kayak, dressed in a neoprene tuiliq. This outfit looks awesome, but it would be much more convincing when Helen at least a part of the techniques would have demonstrated in a whitewater- , touring - or seakayak with a standard euro-paddle and a PFD. Don’t misunderstand me: I do completely agree with Helen’s claim, and believe in the benefit of introducing elements of the Greenland approach in the “Euro-classes”. But showing the techniques in non-Greenland kayaks and paddles, in combination with added tips about dealing with a feathered euro-paddle, the body-position in a kayak with a higher freeboard, about the effect of a PFD on rolling, would simply have made the DVD more attractive for a wider public. 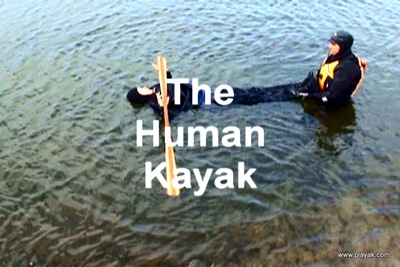 The second issue concerns the menu-structure of the DVD. You’ll watch the entire DVD from the beginning to the end probably just once: perhaps only the first time, when you want to see what it’s all about. Later you’ll want to jump directly to the part of the instructions on which you are working at that time. The menu structure of “Symplifying the roll” doesn’t facilitate this: only the 4 main chapters are separated. To find an individual subchapter you must scroll forward or backward within the chapters (like in the old Videotape-era). This is a bit annoying and wouldn’t be necessary, because Helen’s lessons are clearly structured and modular.

Symplifying the roll is a great DVD, highly recommended for: