Review: This Is The Sea 4 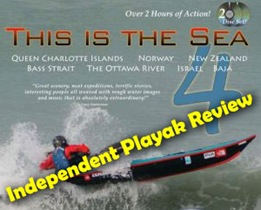 This Is The Sea 4 – Independent Playak DVD review

With the “This Is The Sea” (TITS)-DVD series, British filmmaker and seakayaker Justine Curgenven created a new kind of seakayaking films: Justine’s camera work takes the armchair viewer right into the action and gives him the thrill of riding the waves. TITS 4 is the latest (and probably the last) in the series, released October 2008.

Back in 2003 at the Anglesey-Seakayak Symposium I joined a group of advanced level seakayakers for the clinic “Tidal races and Overfalls”, lead by American expedition seakayakers Leon Somme and Shawna Franklin. Conditions were rough after a stormy week. I was impressed by the big water and highly concentrated to stay upright. Shawna and Leon were leading the group relaxed and effortless with a big smile, messing around and demonstrating maneuvers I had never seen done before in a seakayak. While most paddlers were just as tense and excited as I was, there was a young woman in a yellow kayak with a curious panther-design, who clearly felt very confident in the races and overfalls. She surfed from the back to the front of the group, from left to right, chattering with us whilst she was fiddling around with the equipment mounted on the deck of her kayak. It was Justine Curgenven, experimenting with a new innovative mount for her waterproof deck-camera. This mounting system facilitates the “middle in the action-close ups” and the “above, below, side and behind perspectives” that have become the trademark of Justine’s seakayaking-DVDs. Half a year later Justine surpirsed the seakayaking community with TITS 1 – “the first ever action sea kayak video”: demonstrating that seakayaking is more than a calm sport for old age bearded men.

The format of the TITS-DVDs is a mix of shorter items about interesting kayak-personalities and special seakayak destinations, followed by some longer features about seakayak-expeditions. In every next DVD this format evolved to a higher level: the picture quality, the camerawork and the story-lines got better every time. TITS 4 topped it and won the most prestigious awards in the world of outdoor-filming. 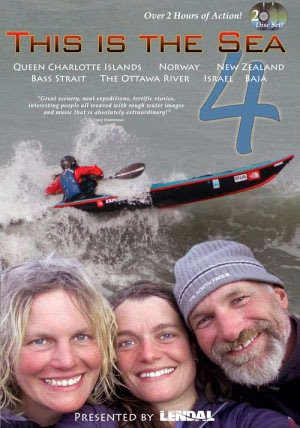 TITS 4 comes on 2 DVDs. Disc 1 is similar to the earlier DVDs: it contains the mix of shorter items. Disk 2 features two extended expedition films. For people who’ve seen TITS 1-2-3 the first Disk may be less surprising: you’ve seen so much before that the format gets a bit worn out. Justine probably tried to prevent this by focusing more on the variety of seakayaking. Very different sides of the sport are covered by showing extreme plastic boat rock hopping, kayak fishing, running wild whitewater rivers in seakayaks, eco (or commando) style Greenland paddling and a father and son having fun in showing amazing balance skills. It’s all beautifully filmed in mostly fantastic sceneries, underlined with fitting music and interesting interviews, but for me it lacks the originality and the spirit of the earlier DVD’s. It’s the tragic of a series: when you know what you can expect, it’s hard to be surprised. But when TITS4 is the first TITS-DVD you watch: you will surely be stunned by Disk1!

For me (and for most people who’ve seen the earlier DVD’s) Disk 2 is the delight. The first expedition film is about the circumnavigation of Haida Gwai (the Queen Charlotte Islands on the west-coast of the US) and here we meet Justine with Shawna Franklin and Leon Shawna again. Leon and Shawna are very comfortable with the camera and friendly and entertaining as ever. The film has a interesting story line. It’s not only about kayaking, it also offers fascinating human stories and you learn about the Haida Gwai culture. All this is presented in brilliant videoshots of the scenery and the overwhelming wildlife of Haida Gwai – seals, crabs, eagles, whales and dolphins are popping up. It’s a very inspiring film. When you’ve seen this report Haida Gwai will be on top of the list of your dream seakayak-destinations.

A different kind of story is the second expedition film about the New Zealand South Island expedition of Justine and Barry Shaw. Again the scenery is fantastic , the filming of the surf landings is spectacular. But this film is more than entertaining. The unique part of this film is the human story: the honesty in which the story is presented is unbelievable. You witness the impact of the daily ups and downs of a long expedition and a dramatic intermezzo where things go really wrong. It’s real. A close finish. This film is gripping.

“This is the sea 4” is unique. A must have in your DVD-collection!