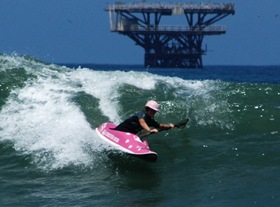 Occupation:
I Just became a student again to become a school teacher, but for the past 7 years have worked as an outdoor education instructor/facilitator

Paddling since:
I started river paddling when I was 19 and occasionally had a play in the surf in my play boat, but I got my own surf kayak last june and actually learnt to surf a kayak since then.

Sponsors:
I’ve recently signed a deal with Airtime kayaks, a new company on the surf scene who is producing the new design from Nathan Eades called the ‘Elushe”. The boat flies! Its similar to my last boat but even pinker! Shred ready sponser me with helmets of which i use the vixen. which is a great helmet for girls and those lovely sunny days on the water. For kit I am sponsered by Immersion research. 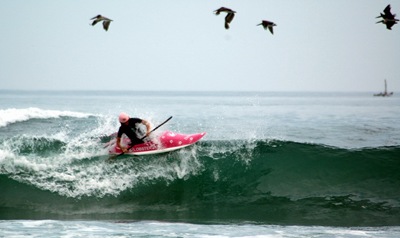 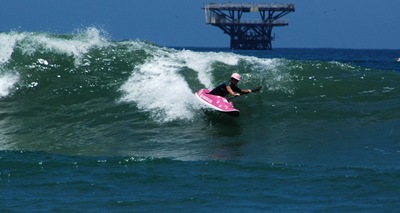 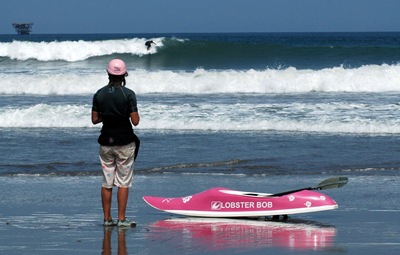 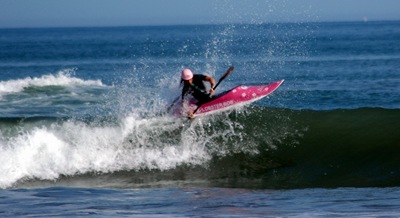 Gear:
I surf the new design from ‘Airtime’ called the ‘elushe’. It is a great boat with a really comfy seating position. I use a shred ready vixen helmet which has made me feel alot happier when surfing shallow reef. At the moment I have an old worn down werner player which I love. I always get laughed at for using them as there is not too much blade left. As for kit I use a neoprene drydeck from Immersion research. Dry decks are definatly the way forward as you don't need to worry about that seal between the deck and top, and using a neoskin for the top just makes me feel like I have a lot more freedom. And obviously in the winter you have to add a wetsuit into the equation.

Favorite break:
I don’t think I could choose a favorite. I surfed so many good breaks in South America but a few that stick in my mind are Organos, Chicama, and Pisinas in Peru. On our last trip to Tonga I surfed shallow reef for the first time. I went so fast it was amazing!

2009 Kayak Surf Worlds in Portugal:
The 2009 worlds were amazing. I was a little skeptical at first but that quickly disappeared as all the hard work put in by the Ocean Spirit organizers and the World surf kayak committee made it a fantastic competition and experience. Having great weather and waves was the icing on the cake and of course winning made me smile alot, oh and getting engaged also made me smile lots.

Favorite destination for the next Worlds:
The USA east and Australia are places I’d love to go, so either suits me.

Ocean Spirit Festival:
The whole ethos of the festival should be followed around the world. I love how it brings so many sports together to share the love for the ocean. There can sometimes be a bad atmosphere on the water between users of different crafts, but why should it matter what you use as long as you enjoy the ocean, respect the other ocean goers and play safe. 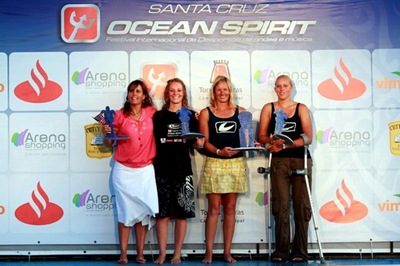 Kayak surfing in Wales:
I’ve had some great days in the surf in both South and North Wales. I probably had my best surf in Wales at Freshwater west. It was beautiful sunny and clean. what more could you want!

Evolution of kayak surfing:
I would love to see the women's standard get to the same standard of the men. 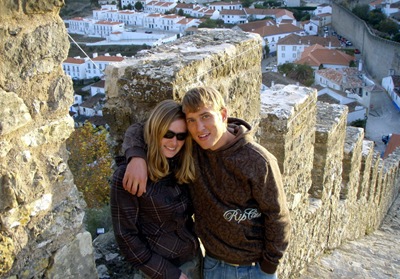 Personal objectives in the sport:
Firstly I just want to keep having fun and enjoy surfing. I’m always very critical of my surfing and i thinks thats what has made me a better surfer. I always want to do things better than I already can, so hopefully at some point I’ll be flying off that lip.

Personal thoughts about Portugal:
I don’t think i’ve ever smiled so much! There were so many things that made it good. Obviously winning and getting engaged, but I loved the atmosphere and hanging out with friends on and off the water.

Final remarks for all women that want to try kayak surfing:
You’ll love it! and you’ll learn to love the beatings.

Pat and wizzer added a video. 9 hours 9 minutes ago