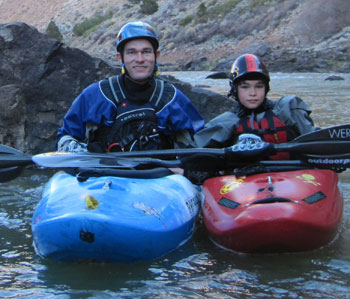 Franken, who co-founded Bomber Gear in Durango, Colo., before moving it to Paddling Life's hometown of Steamboat Springs, was a well-respected member of the paddling community, known for his fun-loving, rally-on-a-moment's-notice personality, paddling skills and apparel design expertise. He was also an accomplished mountaineer, climbing K2 in the Himalayas as well as other major peaks.

Franken moved from Steamboat to Easley, S.C., in January 2011 when Bomber Gear, which specializes in the design of performance whitewater skirts and technical paddlesports apparel, was sold to Confluence Watersports in late 2010. The move allowed him to help Bomber Gear reach its full potential.

"We are so deeply saddened," said Confluence director of marketing and sales Cheri McKenzie. "It's a sad time for us and we are focused on helping his family."

Since the acquisition by Confluence, both Franken and Bomber Gear had blossomed. Franken had used his time at Confluence to bring his beloved Bomber Gear to new heights in both performance and material, debuting a new line of paddling drytops, jackets, pants, shorts and sprayskirts. "I'm super excited about the move," he told Paddling Life shortly after the sale. "It should allow Bomber gear to reach its full potential while allowing me to create the products I've always dreamed of with their full resources behind me. They have a great team in place and it will be great to work with them."

Confluence was equally happy with the partnership. "Confluence is acquiring a heritage brand and product line in Bomber Gear, and also is bringing a legend in the core whitewater community into our family," Confluence CEO Sue Rechner told Paddling Life at the time. "This investment is in perfect alignment with the vision for our accessories business to provide a strong value proposition to our customers."

Added General Manager of Accessories Chris Pageau: "Acquiring Bomber Gear has given us a tremendous strategic thrust forward for our accessories. Rick will be able to focus on what he enjoys most and does best - designing cutting-edge products and bringing innovation to retailers and paddlers. Confluence gains strong design prowess and vision for our accessories division."

Franken was a master cut and sew product designer. When Bomber Gear was first produced in Durango, Colo., Franken lived and worked with his Navajo sewing base. When Bomber Gear's production was moved to Thailand, Franken embedded his family and his life in the community in which his sewing base lived. Moving to Easley to join Confluence was an extension of his dedication to the brand.

Updates will be posted as they become available...


Paddling Life News on Playak is © and presented by: