The Amoeba Carver has been a long time in coming. I used to run a rafting centre near Salzburg in Austria. At this time Shaun Baker was on the search for some new waterfalls and as I knew the area we ended up running the Kitzlochklamm for MTV. Jacko and Paul Fletcher were there and introduced me to the UK kayaking scene. I continued to run rivers with Paul and we ran the "Fall Guys" extreme kayaking event with a massive TV satellite distribution worldwide, including Eurosport, DSF, RTL and MTV. We became quite popular with sponsors and the European press.

Paul and I have been making plastic products since then. Paul concentrated on boats and IT, creating several designs for Prijon. I became a plastics consultant and provide technical solutions for industry; this could be developing self lubricating nylon crane sheaves for a 400 ton oil rig drill, or even the machines to produce that plastic.

For one particular automotive project we required a mould for experimenting with a new polymer that would allow you to reproduce accurate graphics on Polyethylene. Most roto-moulded kayaks are made of this, so we used a kayak mould. Having started to enjoy kayak surfing in the UK and abroad, I was also keen to make myself a performance surf boat that would survive the rigours of travel and car parks; that I could launch of the rocks, or scrape on the reef without crying. Paul worked on this with Malcolm Pearcey, who was interested in bringing out a plastic surf kayak, but did not have the know-how to make the change to plastic.

When Malcolm dropped out, to continue working with Rototek (who produce Mi, Xcess, X-ray), Bill Mattos (Nookie) jumped in to help re-design the boat, having identified several problems with the first model. Bill has made some radical changes to the norm, including accurately identifying the development of thrust through the fins. 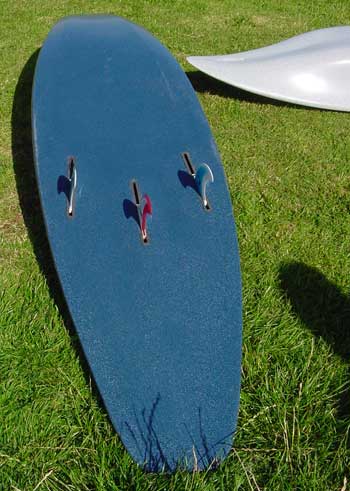 The big moulding machine took an age to be set up, which caused a lot of delay, but was eventually commissioned a month ago. We launched the surf kayaks at the Irish Surf Symposium, with prototype fittings, and received some great feedback having forced all sizes of paddler into the boat... and fiddled with nuts and bolts for several days. We have adjusted the fittings and are making the final mouldings now. 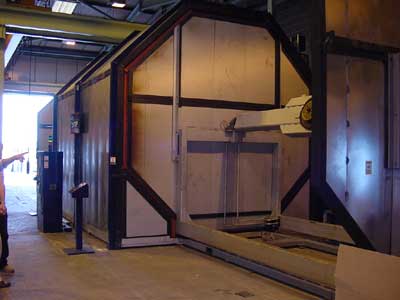 The Amoeba Carver is edgy, tough and fast. It has the fitting aspects kayakers expect with a plastic boat, such as an adjustable seat & back strap with lumbar support. The fin boxes are standard 10 inch boxes, which doesn’t limit you to a choice of fin. It all comes in a snazzy tough nylon boat bag, which doubles up as a kit bag. So now we have an affordable performance surf kayak (in a bag!). 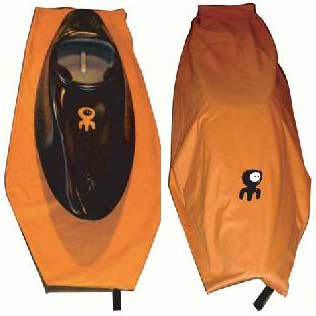 The polymer research also went well, and we have produced a metallic colour boat with accurate graphics instead of stickers, we call this material sympolene... but the polymer we’re coming up with next month with be REALLY exciting, We’ll keep you updated here...

All details plus some more photos of the Amoeba Carver are in the Kayak Database.