Back Stab by Ken Whiting

The Back Stab is simply a Blunt done in reverse. This means you'll aggressively move from a backsurf to frontsurf, and throw your bow almost vertically into the air. The Back Stab is easily one of the trickiest moves to master and requires awesome backsurfing control and awareness, as you'll need an aggressive set-up, initiation, and recovery.

The Back Stab is set-up in the same way that the Blunt was; only you'll be doing so from a back surf. The key is building up speed and carving as aggressively as possible towards the shoulder of a wave, without sliding too far down the wave face. This means starting high up the face of the wave, pointing to the shoulder, and getting your boat on a carving edge.The Back Stab is initiated at the shoulder of the wave, at full speed. Initiating the Back Stab involves releasing your bow from the wave, and throwing it into the air. You'll do this with a snap that is provided by powerful weight and edge transitions, along with what is basically a well-timed, ultra-aggressive stern pivot turn. The snap comes from starting with your weight forward and having your boat carving hard on edge before your Back Stab is initiated. 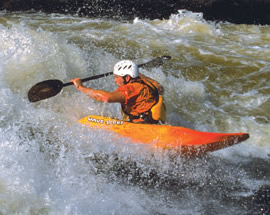 When the time comes to initiate the move, lead aggressively with your head and body, plant a powerful forward sweep at your toes on the upstream side of your kayak. This stroke will pull your stern to 12 o'clock as you snap your boat onto its other edge and your weight backward. You need to time your stroke with your edge transition so that you have pulled your stern all the way to 12 o'clock before it enters the green water. If you initiate your stern before having pulled it to 12 o'clock, you 'll catch your upstream edge and find yourself face surfing before you know it. 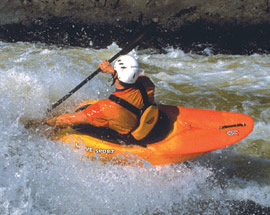 With a powerful snap and forward sweep, your bow should now be flying through the air. The challenge now is to land in a controlled front surf. 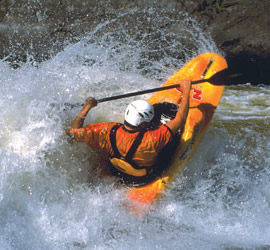 The key to doing this is levelling off your kayak before your bow reaches the water. Your hips and knees are responsible for this edge transition, but a recovery stroke will also help out. The recovery stroke for a Back Stab is a forward stroke that you'll take on the opposite side of your initiation stroke, just before your bow touches down. This stroke has three major roles. It helps stop all the spin momentum you established for the move, it provides a brace that will help you level off your boat tilt, and it provides forward power to keep you on the wave. 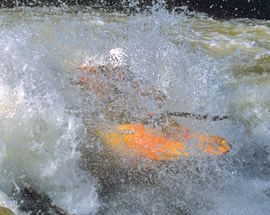 I said at the beginning of this chapter that the Back Stab is one of the trickiest moves to master. The reason for that, is because the set-up requires a high level of comfort and control while backsurfing. Once you have that control, the Back Stab is often an easier move to nail than the Blunt is, because you're using a more powerful stern pivot turn instead of a bow pivot turn. With that said, the quickest way to start hitting this move is to practice and develop your backward awareness and your backsurfing, so keep working on it!

All content on this page is from the "Playboater Handbook 2" by Ken Whiting.

For more information, go to http://www.playboat.com.