The Teva mountain Games in Italy might not get the same hype as the one in the USA , but believe me, the quality of this weekend is incredible… For the athletes, the courses where we compete are challenging but fun, and for the media it is easy to access and get quality footage from each event.

Friday kicked off with a team race on the famous Egua river. Countries entered the competition consisting of teams of three and three. Most spectators were at the bottom, watching the last three exciting drops. The course is a pretty much a continuous class four slide for about 4 kilometers, with a few drops in between, and potential pin spots. The idea is that you are not allowed to lose your team mates out of sight, you have to paddle as a team, work as a team and get to the finish line as a team. Just like a normal day on the water! The winning time was a whopping 9.29 by the locals Francesco Salvati, Michele Ramazza and Bastiano Mich.

This event was followed by a downriver race, also on the Egua. It all came down to Kiwi wonder boy Jared Meehan on first place in the men's, and myself in first in the women's with Jutta Kaiser breathing in the back of my neck on second place.

Saturday was yet another busy day with a sprint competition on the Sorba, followed by an Extreme Slalom event. This location is my favourite competition spot in the whole world. The town of Rassa is a charming little Italian village situated pretty much on the starting line… You wander up and get your cappuccino before the race, listening to the excited inhabitants going off in Italian, and even singing a little traditional tune… Simply fantastic.

The sprint course starts off with some technical class three, before you drop over the three final drops, with the first and the third being the big ones. This time it was Frenchman Eric Degul who was the fastest, with a time of 1.37.5 min. Just behind him, with 1.37.9 min(!) came David Arnaud and in third Jareed Meehan with 1.38 min.

In the women's Jutta Kaiser grabbed a solid first spot, follwed by myself and Ingrid Schlott.

After a quick lunchbreak Francesco Salvati and Arnd Schaeftlein started putting up the numbers for the extreme slalom. They were placed in particularly tricky eddies on the lip of the drops, and just below them. This is always causing some headache for the competitors, since we are not allowed to test the course before the competition. Lots of speculations are always going on about touching the numbers going downstream, upstream, sideways etc etc. This is usually when I remember the promise I always make to myself before this competition, about getting into a slalom boat before next time. Unfortunately, it never happens…

In the men's class Jared once again proved why he is competing slalom for New Zealand , and cleaned the table with 1.25.7 minutes, followed by el Senor Michel Ramazza (IT) with 01.27.2 min. On a very strong third place, Welshman Matt Cook made his way to the podium, paddling not even a second slower than Ramazza. Well done, Matt! 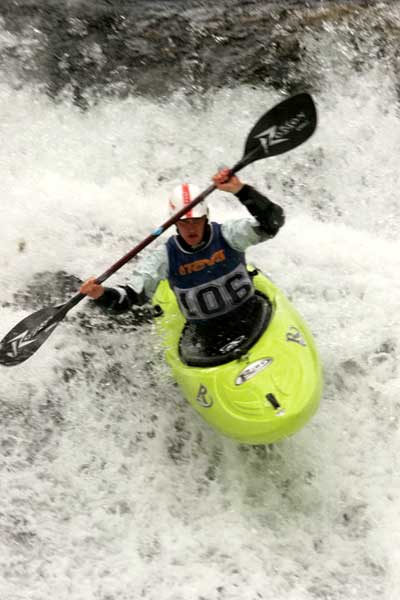 In the women's class Jutta Kaiser styled the run and grabbed first prize, followed by Deb Pinniger herself, and Germany 's Lilli Winter third. The slalom was the last competition which would give you a high score in the overall results, as the kayakcross the next day would only count half as much as the other competitions. 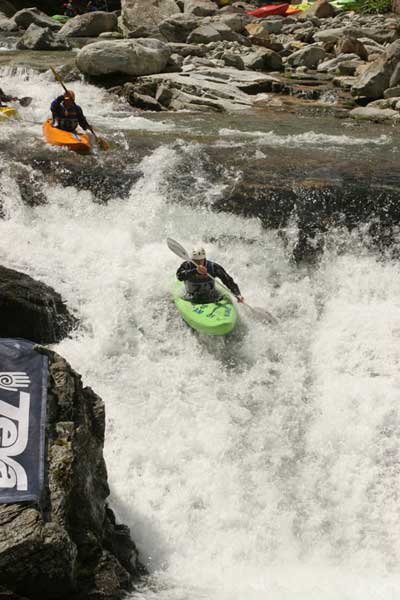 I am sure this must be the reason why the europeans decided to try and empty the local village of drinks that night, and why quite a few paddlers looked a little rough the next morning.. Just like it is supposed to be, after all, this is Europe … 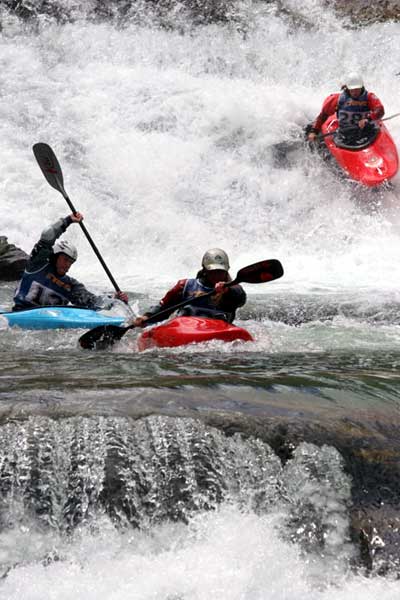 The head to head was as normal very exciting to watch, and even better to take part in! Armed with my new elbow pads from IR I felt pretty safe heading to start, only to realize that Jutta got the full shoulder protection gear which makes me look like a little 12 year old girl (almost)… Anyways, after some good carnage, lots of fighting and exciting lines the men were down to four in finals. In the end Michelle Ramazza claimed first place, tightly followed by Frenchman Patrice Poueyto. Bastiano Mich (IT) touched the banner as third person. 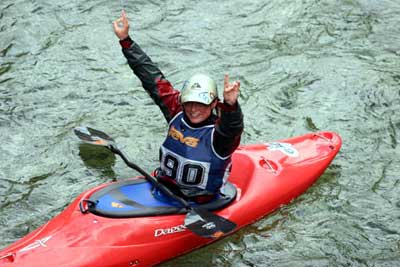 My IR elbowpads turned out to be a lucky piece of gear and I snatched the first spot in front of Jutta. Fellow Scandinavian Malin Bergman got the bronze. 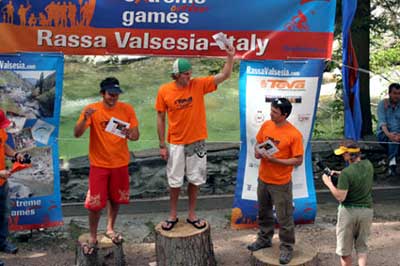 An excel sheet with the complete results is available here.

I would like to say thanks to everybody who participated, helped, watched, organized, partied, cheered, cursed and all that, and as always, Francesco Salvati and Arnd Schaeftlein made sure the event ran smoothly, or as smoothly as possible in the kayaking world. Thanks! Especially I want to congratulate Malin Bergman (SWE) with a great third place overall, and the Norwegian team with the fourth place in the team race.