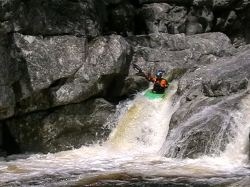 The standard section of the Witte consists of mostly boulder garden type rapids that are seething in undercuts and siphons. The river is very continuous and a typical river runs take between two and four hours depending on how much you scout and/or portage. It can be done in under an hour and all the rapids are runnable. The average gradient is 36m/km for the full 7.5km stretch but some sections are way steeper and this produces rapids in the class 3 to 5 range, and at high water 5+.

Beware the rapid at the normal put in. It has a large siphon river left in that pocket, and a big undercut. It has been run many times but most prefer to avoid it. The river starts off very gently and gets you warmed up for the meatier stuff. Although I say the average gradient is 36m/km, the first kilometre and a half is not very steep, and neither are the last two I’d say. So the action is in the middle, the perfect setup, and obviously to balance the mathematics out, it is a fair amount steeper than 36m/km. The first few rapids are quite relaxed but technical, then after a steeper drop, a short pool and a few more easy drops the fun begins. It is impossible to explain them all but there are some awesome rapids up there and I’d say they are actually more technically demanding than the bigger rapids further down. As can be expected, there are several siphons (which you mostly won’t be aware of) and a couple of rapids where there are must make moves. One in particular has a small eddy behind a large rock, you have to ferry to the right and if you don’t, you could die. A chap once didn’t make the right ferry, ejected from his boat, and got sucked through a siphon; truly horrible. I have photos of this particular siphon with no water (summer time in the Cape and there are actually three there). It is extremely small and I wonder how he even passed through. 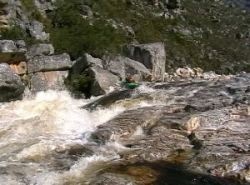 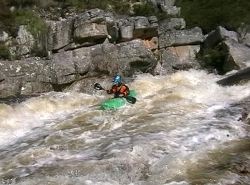 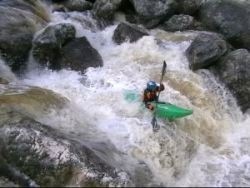 At roughly the half way point is Pilkington Falls. If you’ve had enough, or if the river is rising, you can get off here and climb out. If the river is low you can also use this as a put in point. The volume usually more than doubles from start to finish because of the water flowing in from the sides. The entry to Pilkington is not ultra easy but you would have paddled way harder upstream. What makes it intimidating is that there is a 4.5m waterfall just afterwards – stay upright. There are two options, a left run against the wall and this is a must boof, or right over the curved boulder. Left is the riskier option and boats have been damaged because of people hitting the rock at the bottom. One chap was also taken behind the curtain and only by throwing a throw rope in with a rock in it was he able to get out – so watch out.

The very next rapid is quite mean too and people who are not confident will portage Pilkington and this one. It has two major siphons and an undercut wall. Be sharp. Below this is another bad section which 99% of people go far right on, then a few more fun drops and finally the 30m slide which is always fun. The right side is lethal and undercut by over a metre the entire way – stay left. At high water it forms big holes on the entry in the middle, go far left to avoid them if you wish.

Below the 30m slide is another great slide and then the entry rapids to Double Drop. At one point you can stay right or go left. Left has a fun, mini slide into a cushion wave against a wall but then you have to be careful to make the eddy above Double Drop itself, you are then committed to running the drop. Or go right quite slowly and make the eddy and decide whether to run it, or portage. There is a huge siphon on river right exiting that eddy but at low levels it’s not a concern. Double Drop has a mean hole at the bottom, which causes a lot of swims. Luckily it has probably the biggest pool right below it. 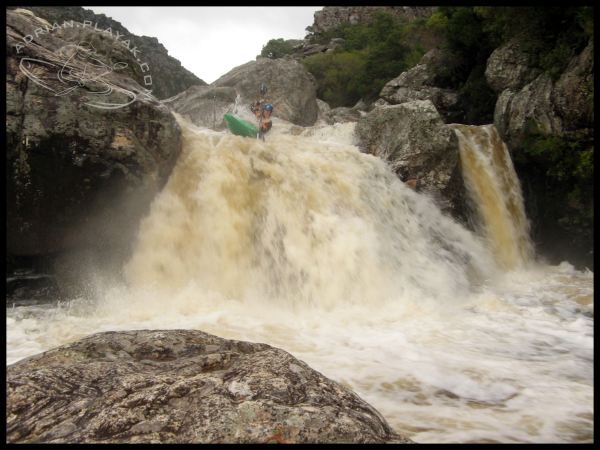 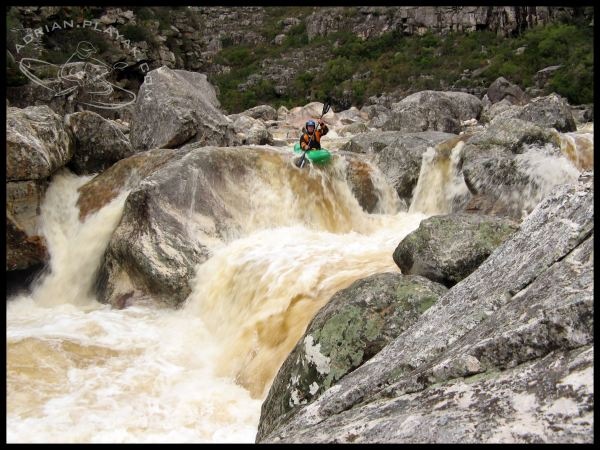 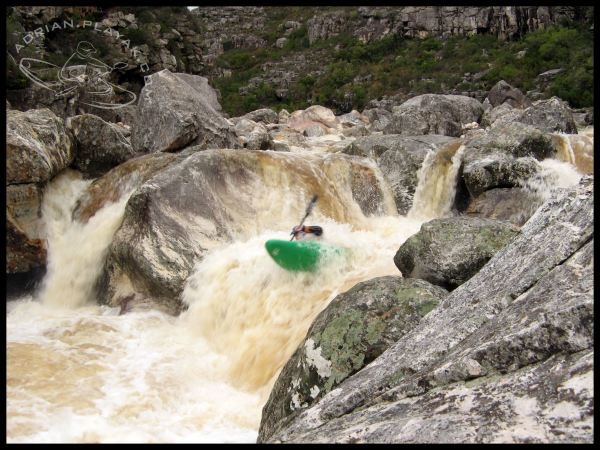 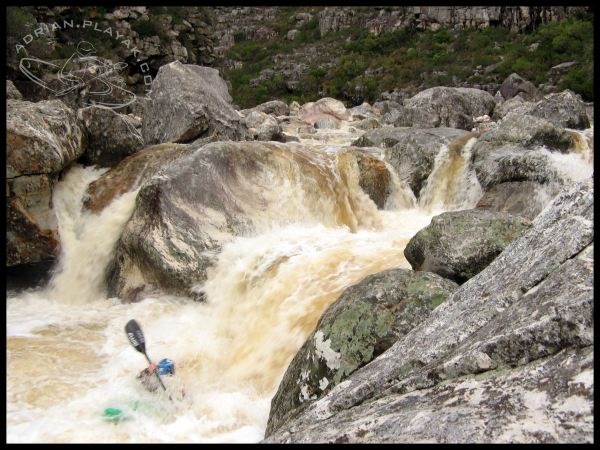 Next up is the Two Teacups Rapid. Two small drops of about a metre each at the top, petering out into a long slide which a curler wave at the bottom. A few more rapids and then another short slide with a large hole waiting at the bottom, stay left. From here there are still many rapids and these have some bad holes, even though the rapids are not that steep. During flood, one can paddle just these rapids. But be careful, there are some monster holes that can keep you for a while. The gradient is still enough to make the last section at high to flood levels extremely serious.

If you have never paddled the Witte before, go with someone who has, several times. There are many lines to take, some of them ending very badly. So unless you are prepared for an 8 hour mission of scouting rather go with people who know the lines. Walking out is not always an option depending where you are. If it’s raining, considering the wisdom of climbing onto this river, it can rise within minutes.

Take out at the Tweede Toll camp site on the left obviously and pay the fees there. If you’re local, it’s best to get a Wild Card because then it’s free. Wild Cards are not expensive for South African residents and will pay for themselves with just four trips down this river alone. 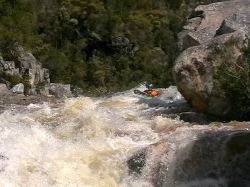 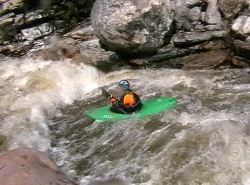 From Cape Town take the N1 out. Turn left at the R44 towards Wellington. From Wellington, take the R303 up Bainskloof towards Ceres. At the top of the pass you will find a few houses. The last entrance on the right takes you to the Bainskloof Corner Lodge. Entrance to the river is here, and it’s free. The owner, Hassan, doesn’t have a problem with kayakers at all. To the right of the entrance is a gate that will be closed but not locked, use this and follow the path to the river. There are two dogs, Gandalf the Weimaraner who is very friendly and the brown Boerboel called Canine. Do NOT touch him. He will wag his tail and come up to you but whatever you do don’t touch him. He hates being touched and will react violently. Otherwise he’s fine and never a problem, just don’t touch him.

The take out is further down the pass at the Tweede Toll campsite. The guys there are very friendly and will allow you to leave a vehicle inside for the shuttle. 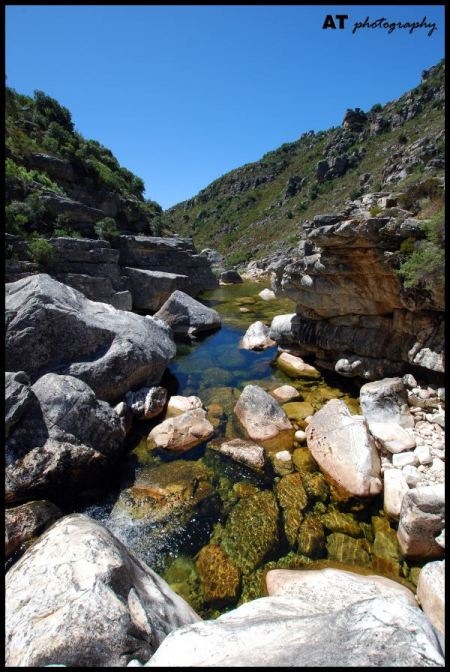 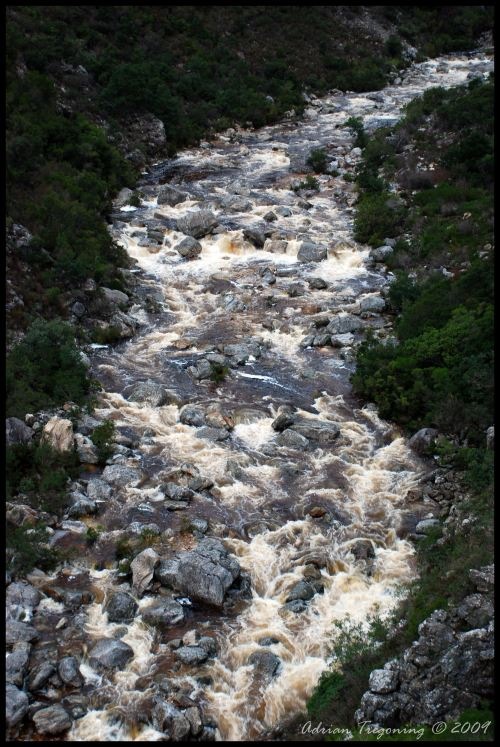 The Witte River offers great, but very difficult fly fishing. It is one of the few rivers in South Africa to offer brown trout. There are also great hikes upstream of the normal put in. One can also paddle above the normal put in and this section is steeper, on average, than the normal section and has even more siphons. To get there one must walk up for 45 to 60 minutes. There is also a tributary coming in on the right hand side near the end of the run, with a slide and waterfall combination that has been run several times. Just be careful, the landing on the waterfall is shallow, so boof.

There are a few people who regularly paddle the Witte when it’s running. Because it only flows during rain, and maybe a day or two afterwards, the chances of meeting other paddlers at the put in are reasonably good.