The Bivane River starts just below the Paris Dam and ends 34 km later at the confluence with the much larger Pongola River. One then needs to paddle another 6.7 km of the Pongola River to get to the take out. In total the combined rivers make for a 40.7 km long paddle with an average gradient of 6.1 m/km. This gradient is nicely spread out resulting in short pools and some easy, but fun, sections. The rapids are mainly in the class 2 and 3 range with one or two in the 3+ range. They are quite technical and beginners may struggle in the fast flowing boulder gardens, but generally they are very straight forward and don’t hide many surprises. The pools are longer in the Pongola but if the water is up then some nice rapids can be found. The scenery is really awesome and I don’t know why but this river will always be one that I’ll paddle gladly. It’s just such a special, remote and chilled out place. Only once will you see any sign of human life, and that is just near the biggest rapid on the river, just before half way. 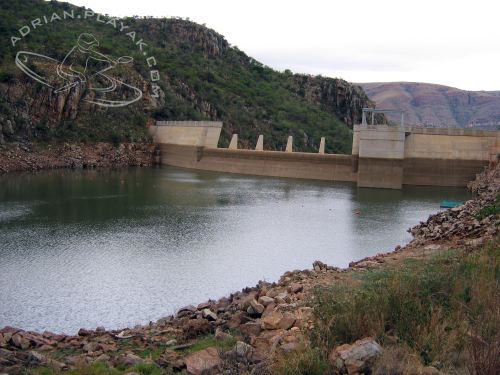 The wall of the Paris Dam. Photo by Adrian Tregoning. 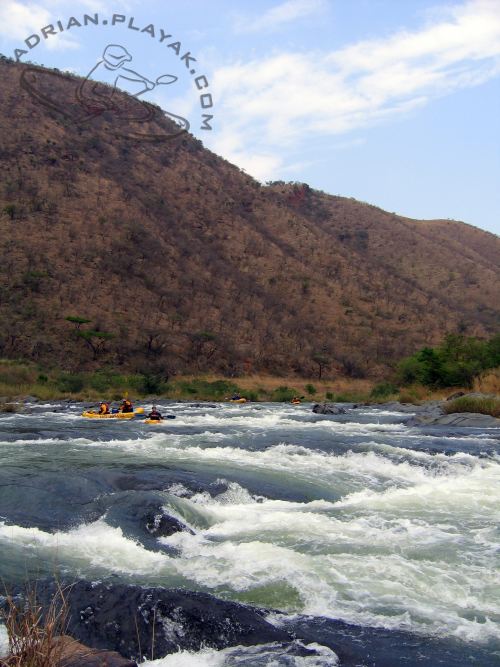 A rapid within the first kilometer or so. Photo by Adrian Tregoning. 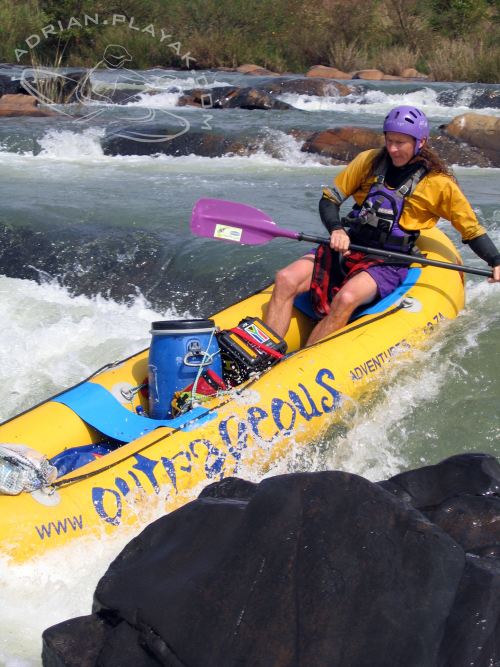 Kallie Zwahlen running a fun rapid that drops into a small chute. Photo by Adrian Tregoning.


Watch out for crocodiles! They are on the lower reaches of the Bivane and there are several on the Pongola too. They are mostly small and afraid of humans so are not a problem. But exercise common sense and don’t swim in the pools of the Pongola. Also, don’t get out on river right from near the end of the Bivane. The Ithala Game Reserve has some large wildlife that could potentially kill you, such as rhino.

The entire river is quite remote and walking out is a problem. Make sure you know where the escape routes are should something happen. We had someone walk out because of a dislocated shoulder on one trip and luckily one the guys had local knowledge of the terrain. This saved them a walk of probably more than a day. 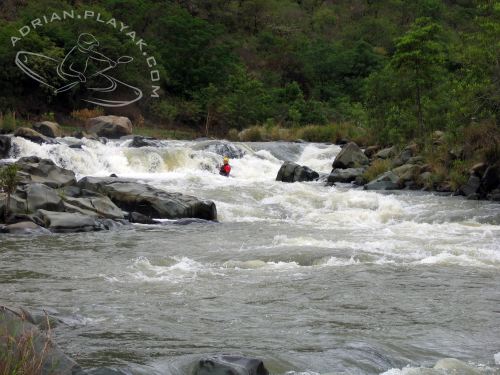 Carl van Wyk finishing off another rapid on the Bivane. This one is a portage for the fibreglass guys during their race. Photo by Adrian Tregoning. 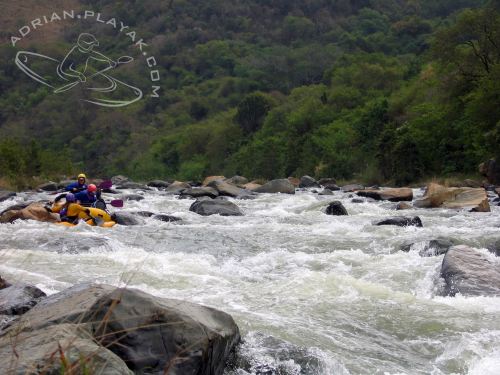 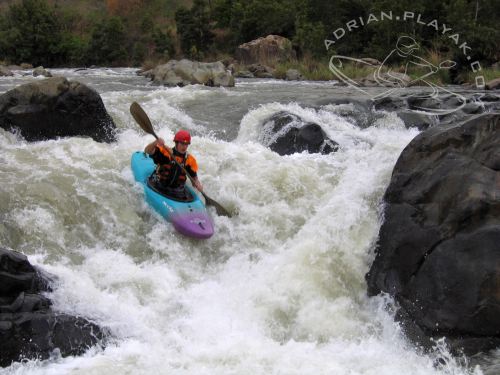 Adrian Tregoning running the biggest rapid on the river. Photo by Cheri Collett.

Normally one paddles this section in two days, spending the night under the stars, but some people paddle it in one day when the annual Ithala Challenge is run. This is a race for fibreglass paddlers in their K1’s and K2’s and includes several mandatory portages for them. 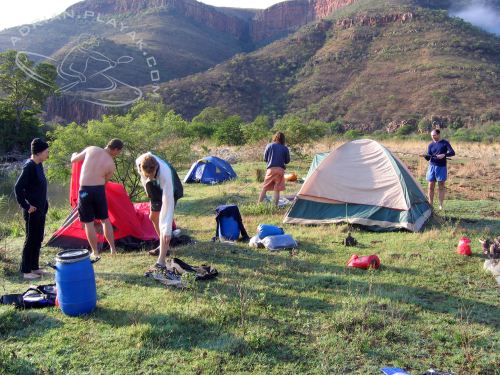 To reduce the impact to the environment, the overnight spot is always held in the same place on each trip. Photo by Adrian Tregoning. 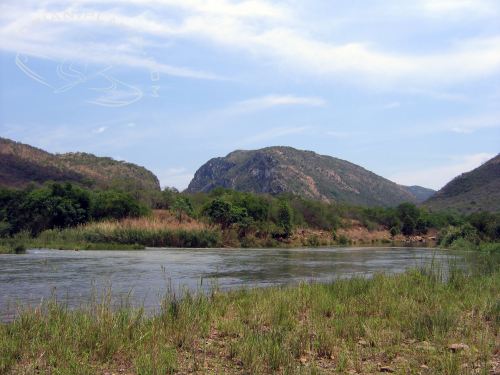 This is the confluence with the Pongola River. See the Bivane coming in on the left hand side of the photo? Photo by Adrian Tregoning. 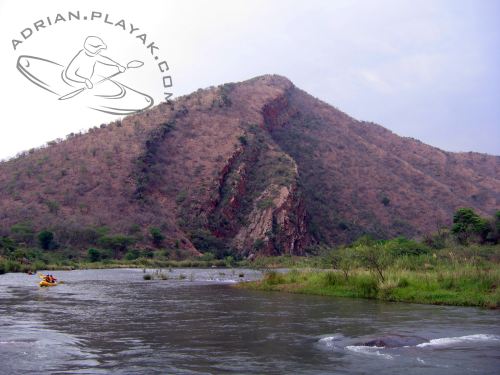 Great scenery on the Pongola River too! Photo by Adrian Tregoning.

From Vryheid, take the R69 towards Louwsburg. 30km out of Vryheid turn left onto the dirt road marked ‘Paris Dam’. 12km down, turn left. 7km later you will find yourself at the dam. The put in is actually below the dam wall, but access needs to be arranged which you can do there. The take out is inside the Ithala Game Reserve and this is just off the R69, further down from Vryheid. Ask at the boom for directions to get to the Pongola River, as that is where the trip ends.

Get a shuttle driver to run the shuttle, otherwise many hours will be lost. To get from the put in to the take out can easily take two hours, depending on the amount of rain and the vehicle used. Speak to the guys at the Umfolozi Canoe Club for more information too. 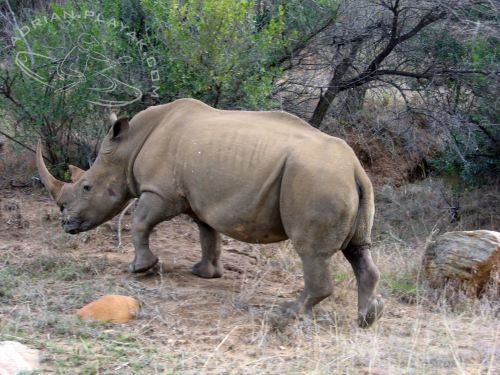 A white rhino in the Ithala Game Reserve. I've seen rhino in here on every Bivane trip I've done... Photo by Adrian Tregoning. 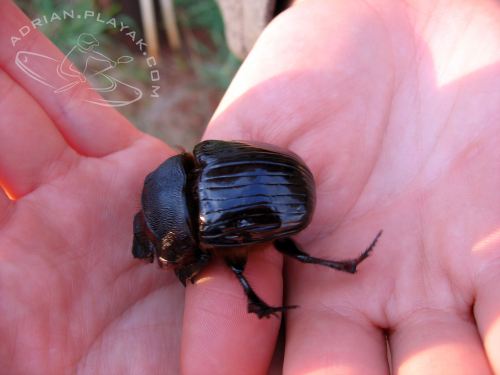 A dung beetle at the take out next to the Pongola River. Photo by Adrian Tregoning. 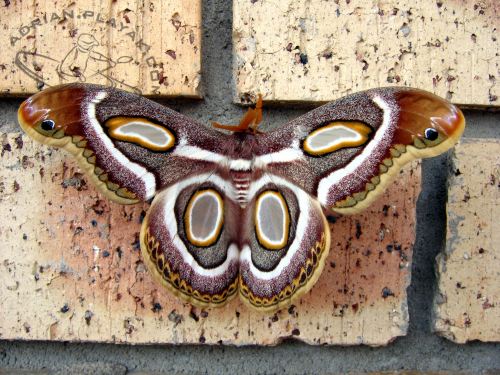 A massive moth at the entrance to the Paris Dam. Africa, I love it. Photo by Adrian Tregoning.

As you’ll probably be paddling the river with a planned water release you’ll encounter a few local paddlers from Vryheid, as well as a whole bunch of other people from all over, including commercial rafting clients. Unless, of course, you’re very lucky to have the dam overflowing and then you’ll be on your own for the entire time.