The Ash was a tiny little stream until the Lesotho Highlands Water Project began to feed water into it. This had resulted in a river that runs 24 hours a day, 7 days a week, 365 days a year. Water flows from Katse dam in Lesotho to the Muela hydropower station and down to the Muela tail-pond dam. From here it goes underground through a four and half meter diameter pipe for 37 km until it reaches the Ash River Outfall. The outfall is a concrete channel structure built on a gradient so as to slow the water down. This obviously reduces the energy of the river and the destruction it wreaks on the banks of this once tiny river. Several weirs have been built to reduce the energy even more. Luckily there is enough gradient to provide us with at least some excitement at a couple of places. The Ash has banks that are made mostly of clay and are eroding constantly. Some rapids may become easier, others more dangerous. Many trees have been cleared by the flow of the water and by people cutting them down. One should always scout these rapids before bombing down with a group of people just in case. 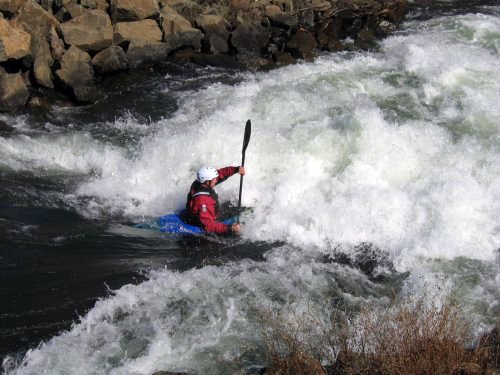 Joe Carter on the first drop below the put-in weir. Photo by Adrian Tregoning. Paddlers used to put in at the outfall but now have to put in further down on river left below the massive weir. No rapids are missed. Only a stretch of flat water anyway. You need to pay an entrance fee of around R25 at the Maluti Lodge in Clarens and get a key for the gate.

From the put-in down to the first bridge are some fun rapids. The first drop is straight forward. Just remain upright and don’t try to surf the first wave. A rock is hiding behind it and if you go over, you’ll pay the price. When you see some evidence of slalom gates, keep alert. You will have to scout if you’ve never done this section before. The last rapid before the bridge is best run on the right, about two meters away from the bank. A large rock used to hide in the middle and has broken the odd boat/person before but thanks to Kallie this rock has been made smaller. If you run far right you will get stuck in the hole as the rock downstream forms a small eddy that feeds back into the hole.

When the first bridge is encountered a nice rapid known as Fish Pond is found. This rapid has caused many swims, broken paddles and injuries. Fish Pond is very narrow and the water runs through nice and fast. Starting off with a small hole under the bridge, there are powerful eddies on both sides and after the first little drop is another very powerful eddy on river right. The water in the middle section is around four to six meters deep so no worry about hitting the bottom. The water then gets shallow very quickly as it enters onto the slide. The slide terminates in a rather broad hole. This hole can hold you in a kayak and has surfed a ‘croc’ (2-man inflatable raft) for about an hour, but you will swim through without any problems. This may change in the future with a change in water levels. The slide itself has a lot of water flowing over it and if run on the right, you won’t even touch the bottom. If you swim in Fish Pond, keep your feet up and do not attempt to swim to the right on the slide. Someone has already cracked their hip here 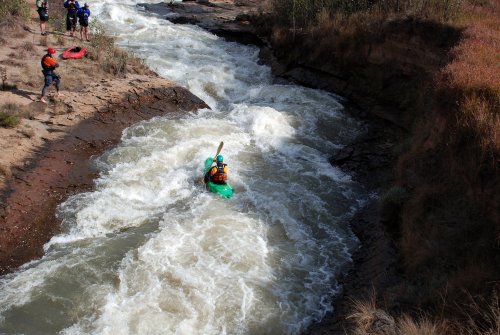 Adrian Tregoning on the top half of Fish Pond. Photo by Wihan Basson. 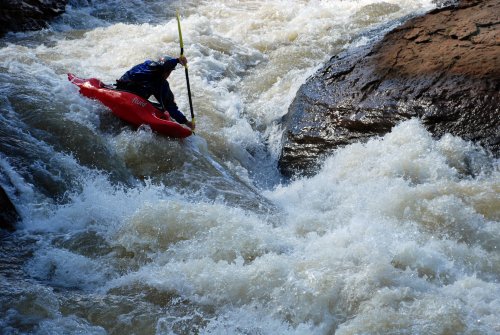 Adrian Tregoning about to ride onto the slide and final part to Fish Pond. Photo by Dave Rice.

The next section to the second bridge is pretty boring and uneventful. Watch out for tree blocks though. There is a very broad section where the river is super shallow and following this is another weir. This weir has been shot several times before but has a severe suck back. Run at your own risk. Shortly after this weir is a rapid and is very similar to the first drop. Just before the second bridge is a small weir comprised of a heap of boulders. Run this one on the right or left of centre. Be careful as you can get pinned here or easily flipped over.

Within a hundred meters after the second bridge is another small drop called Big Surprise. Run this one on the left or right but not in the middle. Left hand side is the usual side. Right is more dangerous as there are some nasty tree roots just after the drop and more pushy water making the line tricky. There is an island in the middle and you will get pinned or hurt. Scouting is from river left. On the right is a lovely barbed wire fence, its purpose to prevent scouting by paddlers! A word of warning… farmers love paddlers around these parts. Just be friendly and avoid conflict. 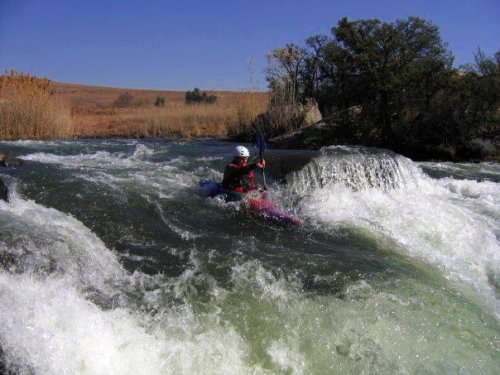 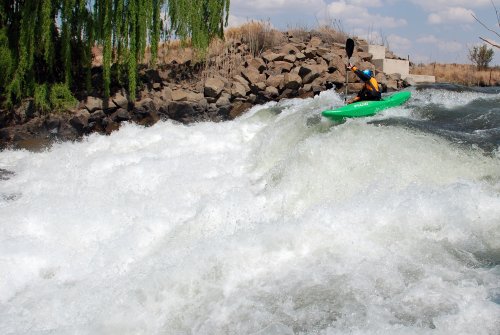 The section from the second to the third bridge is much longer than the first and middle sections. This is probably also the best section. There are many more rapids than the other sections.

The so called class 5 rapid is a short, powerful and very dangerous rapid. It has been run only a few times on the left and the main run on the right has been run on purpose only by Steve Fisher. I say on purpose because the first time I ever ran this section was with Phillip Claassens, Dave Peak and Carl van Wyk and we went straight through here at high levels. There were no eddies and it was too late. Watch out. At the moment there is a power station being built here and this rapid will probably dry out then. Get out well above the rapid if you are not confident with catching eddies.

There is another rapid and then the waterfall which can be run but has a strong suck back. The right is a bit dodgy and the left end has a tree there and also an undercut bank and a small siphon just downstream. It feeds strongly into an undercut rock on the left, along with some roots from the trees. The suck back is strong and can hold a swimmer. Two mates of mine have been creamed in here and a woman was killed here long ago. If you are not one hundred percent certain you can make the boof, don’t run it. There is another rapid immediately below the ‘2 meter’. It has a very powerful hole that can flip you before the last hole which is less violent but more sticky. Between the two holes is a shallow rock that I’ve cracked with my head and myself and a mate have torn dry tops here; right shoulder, both of us. Run it as far left as possible. 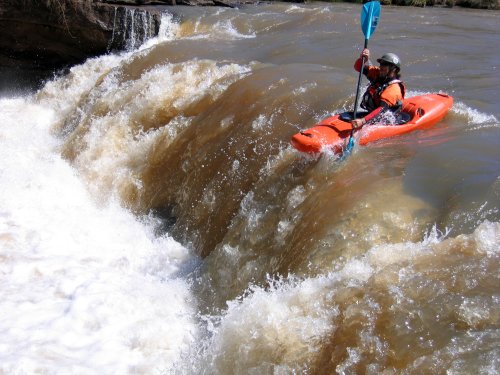 Further along is also a weir that is gently sloping. It is followed by a slide and into a nice foam pile. Scout before hand. At higher levels the foam pile can get fairly big below the slide. We usually run the weir on river right and then one can catch the eddy on the right. Below this is another longish rapid consisting of waves and the odd pour over. Right has some shallow rocks and you can easily get pinned there. There is a log on the left near the end, avoid it at all costs. Straight down the middle is the best line. 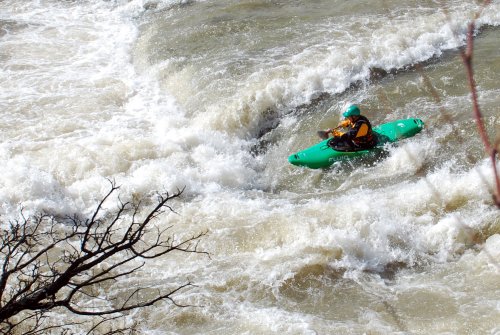 A few more rapids follow before the end. Somewhere closer to the third bridge is a rapid that starts with a weird wave at the top that is perfect and follows into a nice rapid. The vast majority of paddlers end here and I would imagine there are a few rapids after this bridge all the way to Saulspoort Dam. The third bridge is a tarred road, (the R711) the road from Bethlehem to Clarens. The other two bridges are dirt roads but both easily accessible. We have left a vehicle at the third bridge unattended many times before and it was fine. Doing this is obviously at your own risk though. It’s best to stay at the Clarens Backpackers. They have a great set-up and nothing stresses the owners there.

The Ash is South Africa’s coldest river but also the only river that provides year round action. I would rate it as a class III and IV run with one V. Most of the rapids have fairly easy lines and the hazards are not too severe. It must be said that if you get pinned or broached somewhere the cold water would become an issue especially considering the fact that most South African paddlers that paddle here are not dressed appropriately. If you’re a total beginner, stay away. But once you’ve got a good roll and in the company of experienced and probably more important, responsible boaters then this river is in the grasp of most people.

There are not really many local paddlers, only about two commercial operations. There are no problems with them. Watch out for the farmers especially the one at the second bridge at Big Surprise. Stay away from them if you can and avoid conflict. Smile and start speaking your best formal Afrikaans.