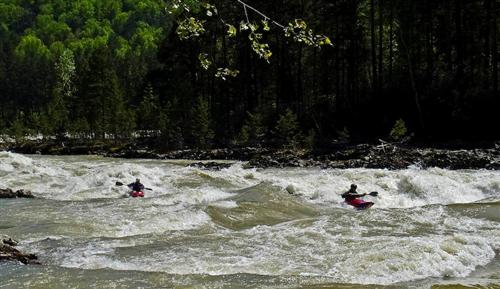 This is one of the best playboating wavse on the lower Katun river in the Altai region, Russia. It is a retentive 8 foot wave in the channel of the river with two eddies beside it. The is wave best at the end of July. The best water level usually lasts for a few weeks.

There is another playspot in the main river channel - Captain hole - that works after Dollar wave gets dropped. Captain Hole is a retentive 5 foot wave in the middle of the river with an eddy beside it. The is wave best at the end of July – start of August. The best water level usually lasts for two weeks. From the bank you have to ferry to the eddy first. It’s easy to catch the way from the eddy. After you flush, work hard not to be too far downstream to reach the eddy.

There is no danger if a beginner needs to swim, though it might take some time to reach the bank, since the river is wide.

M-52 is the road that goes from Novosibirsk to Altai mountains. It is one of the main roads through all Siberia. It passes all the major cities of the Altay region of Russia, like Barnaul and Biysk. The playspot is on the 475km of M-52 road and is clearly visible from the road.

Russian people are friendly and welcoming in the area. No Altai people around. The only thing you should probably never do is drinking alcohol with Alataian people. But you’ll never meet them on Lower Katun anyway.

The campsite to stay is right on the bank beside the wave. There’s a small garbage cleaning service fee that you may have to pay, but usually it is no more then $2. Lower Katun is a holiday resort, so the surrounding area is stuffed with discos, saunas, clubs, restaurants and hot chicks from all over Russia having their vacation. So, it is normally a good idea to go partying in the evening after a play session.