The Embla drains some of the highest mountains in the region of Sunnmore. The water is clean and the river is great. From the put-in it starts of with a kick. The first rapid is about 1 meter from the eddy. The first kilometres has some steeper drops and easy stretches in between, everything in a relatively open terrain. About halfway down the run it narrows into a canyon. This is where all the good stuff is found, but it's not easy to get out of the canyon even though it can be done.

From midway and down the river is in drop and pool style. Everything can be scouted or guesstimated. And there is always an eddy when you need it.

Difficulty is between III to V in the gorge. And between II to III before the gorge. Distance: approx 4.5 km Gradient: 24 m/km

The water is relatively cold and the canyon doesn't let so much sun come down. Best time of year to run it is late june- mid august. The waterlevel can be estimated at the bridge to Ophaugsvik. 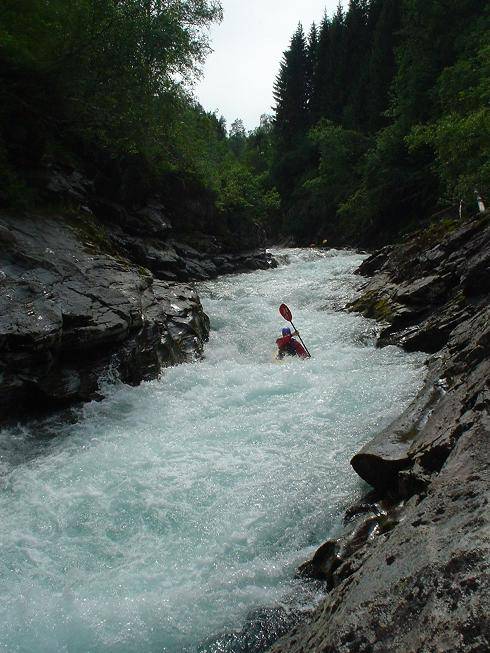 Lars Olav Sandnes in the gorge at around high medium waterlevel. Photo by Nils Tarjei Hjelme.

From the harbour in Stranda, follow the main road (Rv 60) toward Ålesund for about 500 metres. There you see a sign towards Ophaugsvik. Turn in there and follow the road for about 200 metres. At the bridge here you can estimate the flow and scout the rapids under the bridge and around the next corner. This is the exit of the gorge. You can choose to use this parking lot as your take-out If you don't have enough water to paddle to the sea.

You have to drive there to find out the waterlevel. But estimate at the bridge to Ophaugsvik. you should have no more than 20 cumecs. And you can paddle it down to about 5 cumecs, althoug that would make the flat parts more than a bit srapy. But the gorge is still nice though. 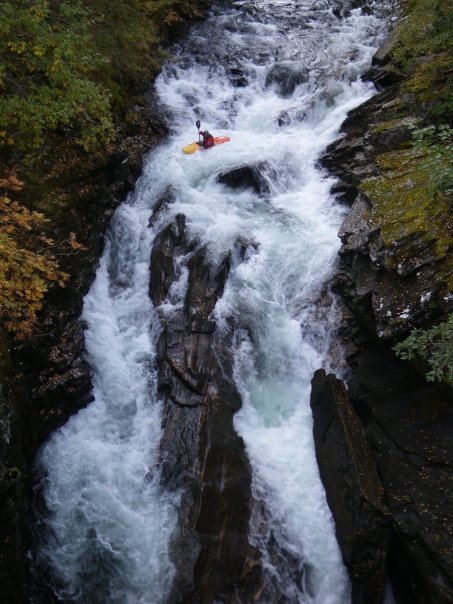 Paddler Are Sandvik in the exit of the gorge. This is absolute minimum of water you need to paddle the flat parts. Photo by Nini Bondhus

The fishermen in Stranda aren't exactly welcoming us. So be nice and please disinfect your boat at the nearest tourist information. As long as we dont trespass their land they can't do us anything.

Norwegian rivers are defined as "utmark" (which is land the government owns). And the use of these areas of "utmark" can't be controlled of anyone. Actually, the people who owns land that share a border with "utmark" HAVE to let you trough. And we can also use 4 meter of land horisontally in from the floodmark of the river. So scouting is no problem if they try to say something else. The law which regulates this is called "Allemannsretten", and it clearly states that every person have the right to use the land owned by the government. If a fisherman threats you here, give him a smile back. If he does something to you or your equipment, call the police. You have the law on YOUR side.