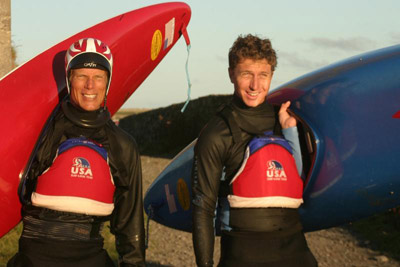 Over 200 competitors from 13 countries as far away as Brazil and Costa Rica , competed in this bi-annual event. 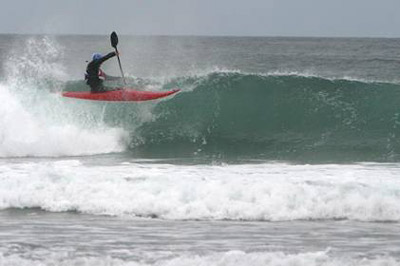 Both John and Jim, of Sun Valley, Idaho, but born on the coast of the Pacific in Santa Monica, California, drew upon their mastery of whitewater rodeo moves, as well as their knowledge of and comfort with the surf, to introduce to this ancient activity, a new generation of maneuvers that are transforming this sport into the next cutting edge extreme sport.

The Grossman boys Looped, Blunted, Donkey Punched and Helixed their way to victory in their 10 foot long surf kayaks. 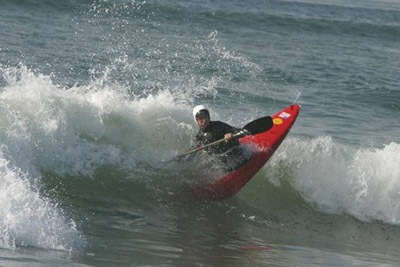 “We come from both a whitewater as well as board surfing background, and I think that’s the advantage we had,” John said. “We were able to fuse the latest whitewater moves with radical surfing moves.”

While traveling across the globe from Baja, to Panama, to Hawaii, to Spain and Portugal training for the event, and even at their home (and the very agro) breaks of Southern California, the brothers were continually encouraged by other stand-up surfers and frankly quite surprised that they were no longer considered below sponges (a.k.a. boogie boarders) on the surfing food chain. “Until recently, when there were good waves, we’d both prefer to board surf,” Jim said. “But now, it’s rewarding that surfers are getting turned on by our performance in the kayak, because we’re doing moves that they can’t yet do on a surfboard.”

Jim, who has been surfing for 34 years and kayaking for almost 30 years, introduced his brother, John who is now a pro paddler for Wavesport, to both sports at a very young age. "I hate to lose, but I can't imagine a better person to lose to."

"We constantly coach and push each other to do new, riskier and more creative moves,” Jim said. “At the end of the final heat, we collapsed into each other's arms as we surfed the final wave towards shore. We were both physically and emotionally spent, but we were also psyched because we knew we had both nailed all of our moves and one of us would be world champion." 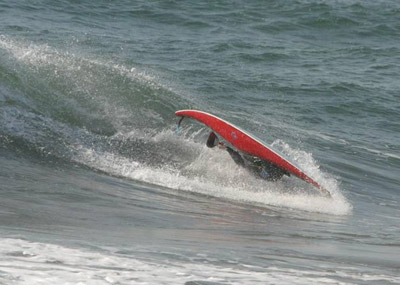 The conditions at this year’s event were excellent, with big North Atlantic swells and beautiful beaches. “ Ireland is one of the best kept surfing secrets,” John said. “Though the weather was not exactly California sunshine, where else can you surf uncrowded, perfect waves in the shadow of a 15 century castle and then enjoy a pint of Guinness just steps away?”

John defeated Jim by only 24 hundredths of a point. Reigning US national champion Dave Johnson of Santa Cruz, California finished 7 hundredths of a point behind to complete the 1-2-3 United States sweep of the event and a thrilling conclusion to the closest finals ever in the history of World Surf Kayaking Championships. 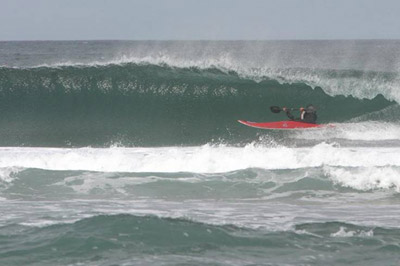 Lydia Fonvielle and Jud Watkins both of Wilmington , North Carolina won the women’s and junior’s events respectively. While Gina Troiani of San Francisco and Dick Wold of Arcata , California both finished 4th in their events.

The fact that John was in the competition at all was pretty remarkable. Less than two weeks prior to the start of the competition, John dislocated his shoulder in the rough surf offshore of San Francisco training for the event. “I was able to roll up with one arm,” John said. “But I was really lucky I was out with a friend, because otherwise I wouldn’t have been able to get to the beach , through the 12-foot shore break.” As it was, it took over 4 hours of excruciating pain before the doctors at the San Francisco State University Hospital emergency room were able to get the shoulder back in the socket.

John was suddenly hit with a huge wave of deja-vu disappointment. Almost the exact same time last year , when he was on the verge of qualifying for the U.S. Team to the World Freestyle Kayak Championships in Austria, he blew out his other shoulder while setting up for a Helix at the end of a high-scoring ride at the U.S. Team Trials. That injury required surgery and six months of recuperation .

But this time , John decided to delay the inevitable operation and go to Ireland , so he could at least cheer for his brother and the rest of the U . S . team (and because he couldn’t get his trans-Atlantic ticket refunded.) He held on to the slimmest of hopes that he could even paddle his kayak, let alone challenge the crushing 15-foot surf of the North Atlantic . But once there , the allure of the surprisingly good, clean Irish surf, confidence (?) in a home-made brace, a borrowed boat (from his brother) and maybe just a little bit of the Irish magic, lured him out into the waves.

“It was incredible to win, especially after thinking I wouldn’t even be able to paddle,” John said. “I never expected to get first. I just wanted to compete, period: And what a way to win , as well, with my older brother so close behind me.”

Unfortunately in the team event that preceded the individual competition, neither John, who was not yet confident in the strength of his shoulder, nor Jim, who was only an alternate to the team, were able to compete with the U.S. West Coast team. The West Coast ended up finishing third behind host, Ireland , and England .

John and Jim plan to lead the West Coast Team to avenge that loss two years from now, at the next World Championships in the warmer, but no less inviting waves, off the coast of Costa Rica . Until then John has a painful surgery and arduous rehabilitation to look forward to, while older brother Jim, plans to tackle the infamous towering waves of Jaws, off the coast of Maui and recruit Hawaiian surfers to field their own team for future world competitions.

Ah yes… “To the runner up … go the spoils”, especially when the loss is to your younger brother.

Complete results are available on kayaksurfireland.com.

The following are websites about the event and surf kayaking in general: