The River Limmat is hardly known for its rad playspots. There is a great initiative to make an artificial wave right in Zurich, called the 'Limmatwave', but it's still very uncertain if that project will ever be realized, as they are still fighting against harsh political resistance. That said, the initiative is great and I definitely encourage all locals to become a member of Limmatwave.

Still, even without the real Limmatwave, there is a wave on the river Limmat, but only if the water level is very high... and to be honest, that's not very often. The ideal water level for the Fahrweid wave to appear is above 140 cumecs. The following photo was taken at 210 cumecs: a nice wave, mixed with holes. It's not very stpped or sticky, so you won't be able to do all the latest moves here, but it's a very friendly place and also well suited for beginners. 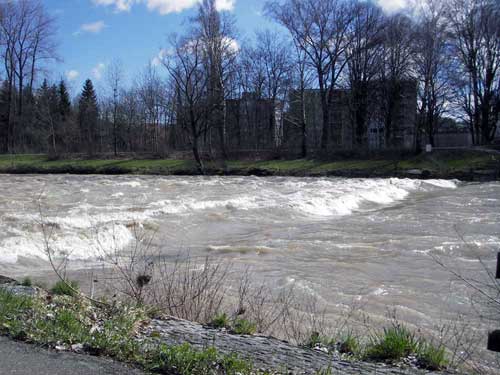 On river left, it's mostly a wave and on river right, it's something between a breaking wave and a hole. Both sides have good eddies.

It's nothing radical and not as good and predictable as Bremgarten used to be, but it certainly is better than Bremgarten after the renovation of spring 2006 :-)

The wave is right after the Überlandstrasse-Brücke, near to Dietikon. It's best to park at the Kanalstrasse, then carry your boat across the island, put-in there and paddle 500 meters upstream. Or you can use the Dornau parking on the other side of the river and put in there. At the weekends and evenings, you can just park your car on the parking place right next to the wave, on the island. 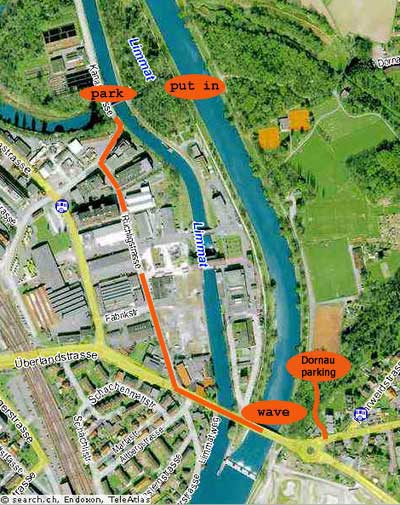 You'll most likely be alone here.