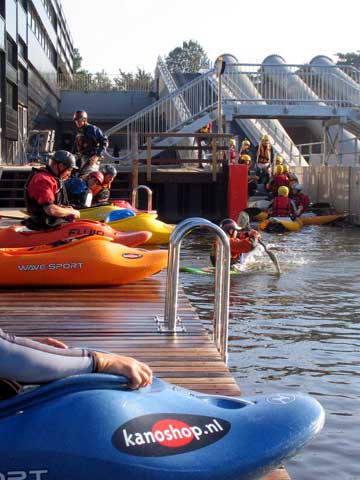 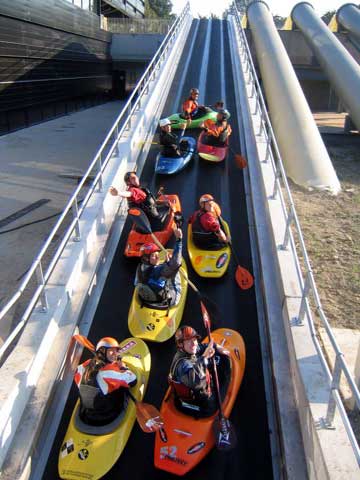 Dutch Water Dreams is the new artificial white water course in the Netherlands. Massive engines pump up the water through 3, 4 or 5 pipes, which creates 300 meters of artificial class 3+ whitewater with a height difference of 5.5 meters. For the people in Holland, who are not used to whitewater, this is quite a happening. Being brought up by the conveyer belt to the put in of the course, you can paddle for hours without having to get out of your boat. The most interesting part for playboating is the wave Casper van Kalmthout designed and built together with Dutch team trainer Rene Boom. Although it is quite shallow you can throw nearly every hole move in there: easy cartwheels, (super)cleanwheels and splitwheels. When making loops or other air moves you will very probably hit the bottom but you'll be able to minimize that in a few runs. Casper could even throw his green "apple" Project into phoenix monkeys!

The course continues with a few drops, a big and very sticky hole and some nice kickflip wave trains. Nice detail: you can get free Redbull at the end of the run (well at least, rafting people can). On October 21st 2006 the course will be opened to the public with the Dutch Championships for freestyle and slalom. Let's hope there'll be a Eurocup event next year ;)

With special thanks to Kanoshop.nl who took the photos for us that day.