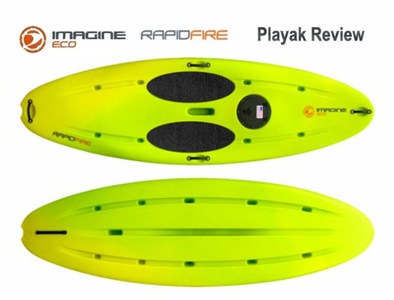 An independent Playak review of the Imagine Surf Rapidfire, an SUP board designed for whitewater running.

Stand Up Paddling is hitting the mainstream and it’s good to see that it’s diversifying into different directions: racing, touring, surfing and increasingly also whitewater. In the whitewater category, Corran Addison’s Imagine Surf is a logical choice. Corran has always been on the cutting edge of water craft designs: he has designed whitewater kayaks for different brands for over two decades, and was also at the forefront of river surfing developments, having some world class river waves in his back yard in Montreal. Considering this mix of expertise, it’s understandable that Imagine Surf offers two different whitewater SUP boards, of which I tested the Rapidfire. Imagine’s description of the board reads: “Amazing whitewater fun. As soon as people moved inland with SUP, they started to explore rivers. Today this is an exciting alternative to whitewater kayaking, and that’s why we created the Rapidfire. A radical departure from surf shapes, it’s optimized to make class 2 whitewater easy, and class 5 possible. The generous rocker, and high volume center help you run through almost anything - even waterfalls and slides.”

The Rapidfire is made of blow molded HDPE plastic, the same process and material used to make Eskimo and Prijon kayaks, known to be a stiff and very durable plastic. The durability is an important advantage for using a board in whitewater, but if also has a trade-off: it’s heavy. Reaching the same stiffness and durability with a more traditional material (rotation molded PE) would make the board even heavier, so that probably explains why HDPE blow molding was Imagine’s choice.

Still, the weight (22kg) was an unpleasant surprise when I first carried the board. I could easily handle a 22kg kayak by myself. It would be a pretty heavy kayak, but I’ve carried 2 kayaks of 18 kgs each without problems, one on each shoulder. An important difference with a kayak is that a board has no cockpit, so you can’t carry it on your shoulder. I improvised a shoulder solution made of two car straps, but that still requires a piece of foam to protect your shoulder, and carrying it from my home to the river (200 meters) is still a workout by itself. So you either need a place where you can store the board right next to the water, or you need a well size pick-up truck which you can park close to the water.

I asked Corran about the weight and his answer was: “In 2012 we've added a handle in the center. Now I drag it or I put it on my head and hold the handles each side”. Dragging actually turned out to be a good solution in most situations. I say “most situations” because the road between my apartment and the river is all asphalt and concrete. The HDPE is made to cope with that sort of stuff, but dragging the board over it continuously still feels wrong. On sand or grass, dragging the board is a perfect solution of course, and getting it from the river up the bank without help also calls for this method.

On the water, the weight is not an issue. I expected difficulties getting the board up to speed or changing direction because of it, but this wasn’t a problem at all.

The fin is not made of HDPE. I don’t know what exactly it is made of, but it feels very hard. I haven’t hit rocks with it yet, but if I do, I’ll let you know the results… Corran informed me that the 2012 version will have a 5" rubber fin. The fin is a bit tricky to put on for a board novice (like myself) - an illustration would be handy for less technically skilled users. 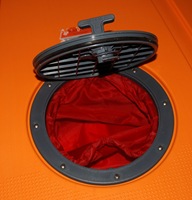 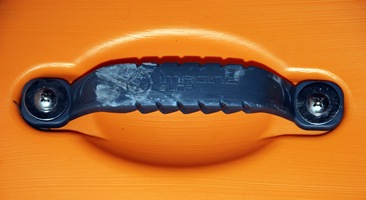 The storage compartment on the front deck is very handy. It’s not a dry compartment, but it has a hanging nylon bag inside, so things won’t get lost and will stay dryer than if they would be lying on the hull of the board.

The carrying handles offer great grip, but the material is very hard, so they can hurt when carrying the board. The side handles are located a tiny bit too far back for my taste. Carrying the board with two people, one on each side of the board, seemed like a great carrying option, but the nose of the board almost touches the ground that way, so it doesn’t really work. The 2012 version will have different handles and a carrying grip in the center, see the next photo:

2012 version of the Rapidfire with new handles.

A metal ring to secure board would have been nice. There is a small hole in the very middle of the board, which allows me to secure it with my Lasso Security Cable, but not everybody has such long locking cables. Another nice to have would have been a paddle clip.

Mind the grip pads. On its first car roof trip, both grip pads let loose. Luckily they were squeezed in between the board and the foam of the roof rack, so they didn’t fly away completely. The adhesive on the pads feels extremely sticky, but it isn’t enough to keep them on the board. Blow-molded HDPE is known for not being a good material to stick things on, as the surface is slightly rough, and the part of the board that the pads are on has a lot of small bumps, which were originally meant to provide grip on their own without any grip pads. After I had to go rescue one pad from washing away, the first thing I did was apply some extra rubbery glue to them, which totally solved the issue. The grip pads definitely provide a lot of grip – good stuff!

The Rapidfire is very maneuverable, partly because it has only one fin, and partly because it is wide and relatively short. There’s always a trade-off of course and in this case it’s speed, but on whitewater that’s a secondary priority. To protect the fin, I assume you can remove it for shallow waters, but I haven’t tried that. I’ve tried other SUPs on flatwater without a fin, and noticed that it results in moving mostly diagonally, and having to switch active hands continuously to get forward. What would help is if you could put the board on edge, but hard edges would probably be a bit too aggressive for a whitewater board. 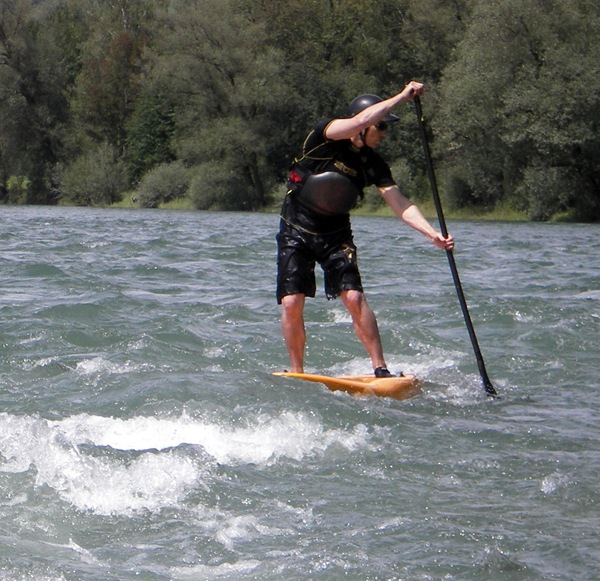 Coming from a recreational flatwater board, the Rapidfire is very wide, also the foot position. Together with the rounded edges, this makes the board very stable and forgiving - even balancing on one foot in the regular wide position is no problem.  The board is still stable and forgiving during extreme stern turns. Ok, I still fell in a lot when trying to really stand on its tail, but that’s not the board’s fault, just mine :)

The width does make it a bit more tiring to paddle than a narrow board, also because the paddle is used further away from the body. I’m used to starting my stroke far off-center, which helps paddling in a straight line even when paddling on only one side, so this technique is even more important when a board is so maneuverable. Then again, the Rapidfire is made for running whitewater, so running straight lines should not be your default goal :) Surfing the Rapidfire is easy and fun. The fin almost works like an autopilot, so it’s super easy to get onto the wave. It also means that it likes to surf straight, and in our case (on a small wave) that caused some unwanted nose dives, so next time we’ll try surfing without the fin. The board has a lot of volume, so even if the nose does dive, you can typically edge a little or just wait, and it will come up again. 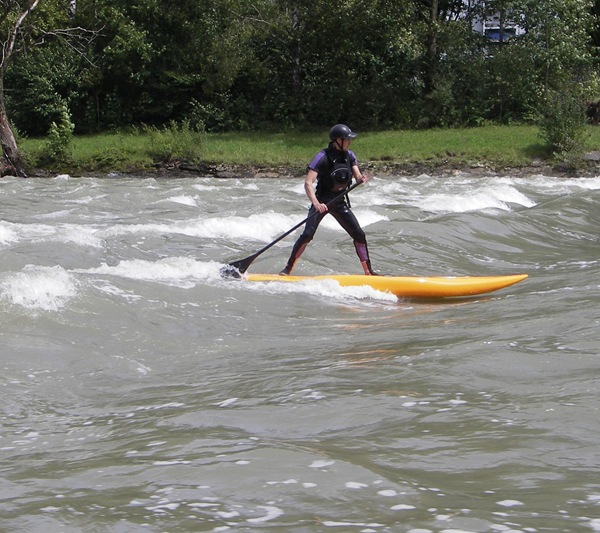 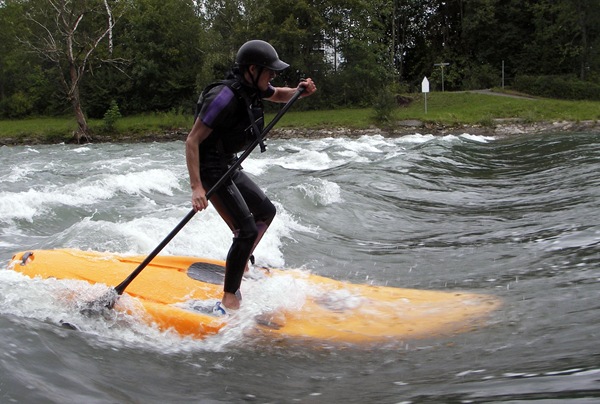 Looks are always a matter of taste of course. Personally I think the board looks pretty sexy and sporty, and most other people I asked thought so too.

I like the concept of plastic SUPs: they are durable and don’t need a lot of care. If you live right next to the water and can store the board there, you probably won’t find the extra weight a problem at all. The Rapidfire is definitely a fun SUP board and a great choice for whitewater: it’s strong, stable and forgiving.

Pat and wizzer added a video. 6 hours 44 minutes ago