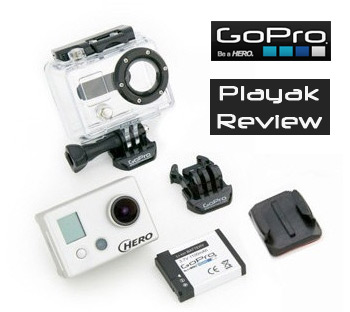 I’m the kind of person who is happiest in the water and I love to share my adventures with family and friends through the video and photos that I take. So I decided to test out the infamous GoPro HD waterproof camera/video camera to capture the action from a personal perspective. Over the last few months I’ve been able to get some footage which was not possible before and test the camera in some interesting conditions. Unfortunately I got the camera as our river season ended but I managed to get a small waterfall in and the rest of the stuff is windsurfing pretty much, as there is a huge amount of wind here in summer. Here is the result and my thoughts.

What It Is / What You Get

The GoPro, whether it is HD or not, is a very small box-shaped camera that fits into a tough, polycarbonate, waterproof housing (60m/180’). The camera is a full HD video camera capable of taking 1080p @ 30 frames per second or 720 @ 60 fps, as well as being able to take photographs at 5 megapixels. It writes the information to an SD card, not supplied. Many normal digital cameras use SD cards though and you probably have some lying around. Then you’ll also get a rechargeable 1100 mAh Lithium-Ion battery, a USB cable, a component video (HDTV) cable, composite video + audio out cable and of course a 1 year warranty. Then there is a wide array of mounts and what you get depends if you buy the HD Surf HERO, the HD Motorsports HERO or the HD Helmet HERO. Each kit has the same basic camera and housing, it’s just the mounts that differ and obviously also the price because of the mounts. The available mounts are described as follows: Flat 3M™ Adhesive Mounts, Curved 3M™ Adhesive Mounts (these are great for sticking onto your kayaking helmet and is what I used), Quick-Release Buckles, Vertical Surface “J-Hook” Buckle, Suction Cup Mount, Three-Way Pivoting Side Arm Assembly, Headlamp-Style Head Strap, Vented Helmet Strap, 3M™ Adhesive Mounting Base, FCS™ Plug-Compatible Mount. I’m not sure if I missed any, but you can also buy the ‘naked’ HD Hero and these are just the camera and housing on their own and then buy whatever mounts you think you’ll need separately.

There is a cool display unit that you can purchase as an extra that clips into your existing GoPro and allows you to preview your image or playback footage. The website says the following:

This wasn’t out yet when I got my camera but I would imagine it’s a very exciting feature to add to your existing or future GoPro camera. 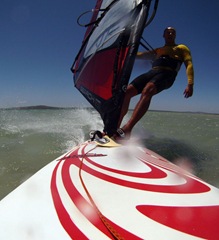 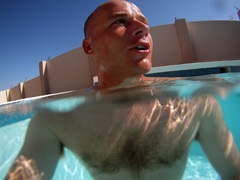 Straight from the box one can use the unit. Place the battery inside, slide in the SD card and put the camera into the housing. There are two buttons to use and I’ve heard some people complain that the system is confusing and not user friendly. I, however, found it very easy to operate, and most others I know agreed. There is the power/mode button, and the shutter button. Easy. The instructions are easy to follow and make sense and there are a lot of options.

For video settings there are 5 different quality settings, as shown further down in the technical specifications of this review. For photos it always stays at the maximum of 5 megapixels but how the photos are taken can be varied. One can take single photos by depressing the shutter release, or the unit can take 3 photos within 2 seconds with a single press of the shutter or one can have it take photos every 2, 5, 10, 30 or 60 seconds with one press of the shutter until you either stop it by pressing the shutter again or the memory card gets full. So you can paddle down a long rapid and let the camera just take photos at your chosen photo interval if you don’t wish to take video. However, screen shots of video are quite good as well and if you’re looking at photos even 1000 pixels wide the screen shots are not bad quality – ideal for the web shall I say.

Then there are all kinds of other settings to change between such as exposure settings of either center weighted or spot metering, a setting so that you can flip the camera upside down but it will record it in the correct orientation, having the camera beep or make it totally silent, NTSC or PAL, auto power off as none, after 60, 120 or 300 seconds, setting the date and time and formatting the memory card (SD card), and also the ability to delete the last saved video/photo.

The settings on the camera and all operations are very easy to do. Skim through the manual briefly and you might need to refer back for specific settings from time to time, but you’ll know what to do right away.

Yipee, there is no software. Simply plug your GoPro to your computer via the USB cable supplied, or slot in your SD card.

System requirements for your PC/MAC. 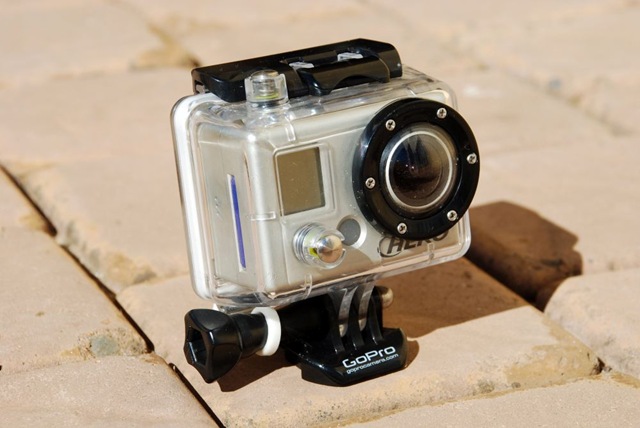 The GoPro HD within it’s housing and with a foot mount attached. 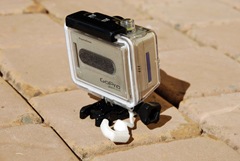 GoPro HD taken from the back. 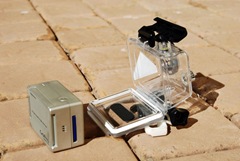 The camera itself outside the housing. You can see the white rubber gasket that seals up the housing. A single clamp at the top keeps it shut. 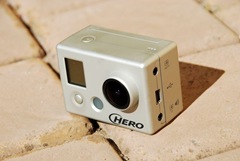 The camera on it’s own. LCD screen on the left is where you know what’s going on and battery life etc.

An innovative expansion port on the back of the camera, the HERO Bus™ accepts optional Expansion BacPacs to expand the functionality of HD HERO cameras:

The test environment was mainly on the West Coast of South Africa. The water is cold and the air hot during summer, making conditions more challenging than usual because of the temperature difference which was sometimes as much as 25 degrees C. The camera remained 100% dry at all times - being waterproof to 60 metres (180 feet) this would be expected. 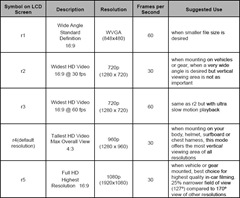 I often had a problem with the camera misting up. This is not a GoPro problem, it’s a problem courtesy of nature. When the housing cools down to a temperature lower than that of the original air inside the housing, it can mist up. If the air inside was moist, even worse. After some research I’ve heard that silica gel balls do the job. They have a high surface area and absorb water. Once saturated they can be heated about to about 120 °C (250 °F) for two hours to dry them out. Either sew up a very small bag to put them in and shove them in the housing, or loose. I tried this only recently and it seemed to work. Another trick I read up on was to open the housing, turn up the air conditioner in your car and close the windows, this will cool the air and more importantly, dry it out. Obviously this won’t help when you’re in a deep gorge in Peru somewhere and then the silica gel balls from when you buy pills/tablets from the pharmacy/drug store will work quite well. A bit of toilet paper in the back of the housing is supposed to work too. GoPro also sells small Anti-fog inserts. Unfortunately much of my footage was taken before I discovered these nifty tricks and windsurfing in Cape Town means cold water and hot air, and the wind has a chilling effect too, so it was very harsh in terms of the moisture and temperature differences.

The thumb screw for the base used to on the helmet mount is not powerful enough. I hope GoPro is reading this and will one day address that issue. Get hit by a big wave and suddenly your camera angle is lost – a bit annoying but not the end of the world. 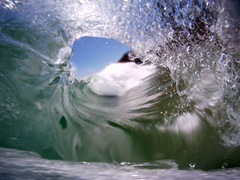 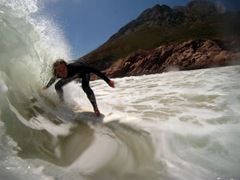 The GoPro HD withstood everything I could throw at it. The unit hit the ground after I pulled out my towel covering it but the housing was totally fine. Throughout the test everything remained dry. The buttons worked when I wanted them to work and I never missed anything that I wanted to capture. The battery lasted long enough to always get the footage and I think it will last for over 2 hours. The footage itself is of awesome quality and even programs like The Deadliest Catch for the Discovery Channel are using them in those harsh conditions. Look at any fairly new kayaking DVD and 9 out of 10 times the head cam type footage is shot by using a GoPro. Even though not all of my video footage might have been the best, because of the reasons stated above, the cameras are very capable of giving world class, television type quality and I love it!

GoPro HD 2010 highlights from GoPro themselves: