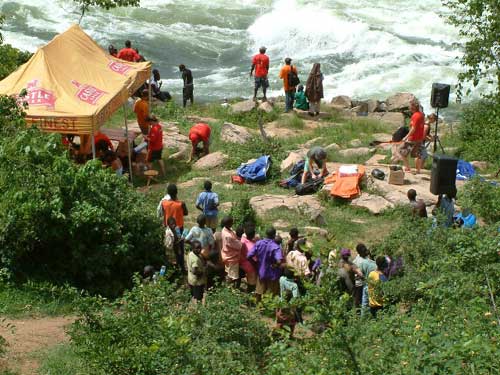 It all kicked off on the Friday morning with competitors and spectators heading down to Itanda falls for an expression session, followed by a paddle to Nile Special – the venue for the ‘Big Trick' freestyle event. With Music pumping and the sun shining 21 international paddlers went big for their chance to win a slice of the 1.5million USH prize money. A new format for this year, 7 paddlers at a time had an open wave for a 45-minute jam session. With the relaxed atmosphere and no one worried about flushing, the moves were big and the mood was mellow. Pan-ams, Helixes, lots of combo's and the occasional porpoise kept the crowd entertained and the paddlers buzzing until it was time to add up the scores. As darkness grew and the floodlights were fired up the kayakthenile team worked out who was going into the final! Thirty minutes, top five men, top three women, in the dark, and the rain. Steve Fisher (RSA), Sam Ward (UK) and Geoffrey Kabirya (UG) went into the session on level scores from the prelims. It was close. In the end Steve won with an awesome KY, followed by Sam busting out the Bread and Butter's. In the women's it was a two-girl battle between Jessie Stone and Rae Borratto. Rae showed her strength popping aerial blunts all night long and winning herself half a million shillings for her efforts. 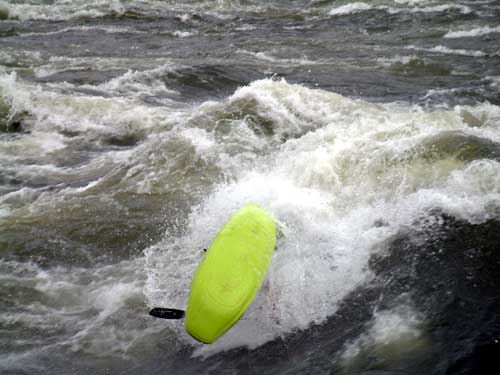 Saturday was a different day and a different event. You hoped you hadn't drunk too much the night before because today was the 45km head to head extreme endurance race. Eleven rapids, grade 1-6, lots of flat water, teams of two, only playboats allowed. Safety was an important factor and this event wasn't for the faint hearted. One stop for water or to sponge a boat would see you out of the pack and out of the race; it was flat out until you dropped. During the first flat-water section 10k into the race, the pack had split into two. Sam Ward from the Hairy Lemon and Will Clark from kayakthenile caused the big upset by pushing the Ugandans hard for the title. By Itanda Sam and Will were in the lead but only just. With numerous retirements, a few broken boats and some clever lines, Will and Sam stayed ahead to bring home the victory in a total time of 2hr 56min. An awesome time in the low levels!! Adrian Kiernan and Anton Imler came in second with a time of 3hr 4min. Team kayakthenile held strong in the ladies with Becky Lar taking the title with Chloe Self from Adrift in a time of 3hr 18min. Tales of the crazy day flowed in the party that night amidst tequila girls (and boys), old school tunes and cheap beer sponsored by Nile Breweries. If you weren't already tired the party made sure of it, leaving many bleary eyed by the time they woke up on Sunday morning. 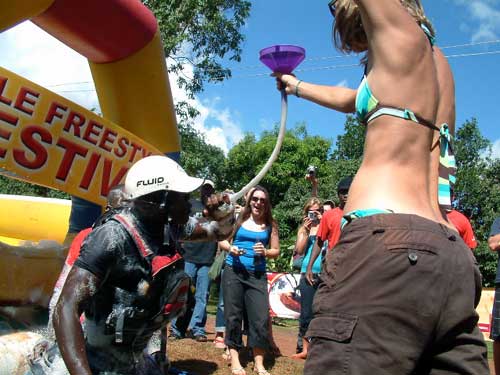 Sunday was all about fun, it was time for the final event – the boda-cross! Forty-six competitors, one section of hard white water, motorbikes, inflatable assault courses and beer funnels. You cannot but love this event. A mass start left little space for everyone down the first few rapids, and an awesome sight for the spectators. The Ugandans went hard trying to bring home the final victory. Geoffrey Kabirya powered his way to the front only to find Sam Ward right there with him. By the time they came into the bank there was only 30 seconds between them. But this was the boda-cross and the paddle was only half of the race. Up the hill and onto a boda-boda (50cc moped), then a race back to the campsite. Sam was in contention for another win until he realised these local boys knew which bikes went fast!! With a trail of dust behind him Geoffrey flew ahead to take the win followed by fellow Ugandans Henry Kitmeo and Nassans Tunabaitamu.

Sunday was a true festival day. Hot sunshine, blasting tunes and cheap beer. While the winners were cornered for interviews and photographs the rest got into their party shoes and headed to the bar. At prize giving a total of 6million USH was dished out to those who had won as well as a brand new kayak from Fluid, Soft kit from GOYA and many other prizes. A new addition to the festival was a photo competition in memory of Ben Holland. Leslie (______) taking the prize with an awesome shot from the river.

Thanks to Jamie Simpson and his team for organising the event, Nile Breweries for all their support, SN Brussels Airlines, Fluid Kayaks and GOYA, Kayak Session, Nile River Explorers and the Hairy Lemon and everyone who gave their time to support this fantastic event. The Nile Freestyle Festival proved once again to be one of the best events in the world, next years event will be on Dec 1-2, so book your ticket and we'll see you there! For more info or for details on paddling in Uganda go to www.kayakthenile.com .

Report by Will Clark. 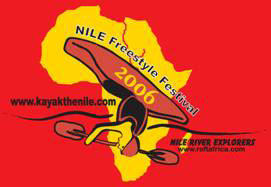 The Toughest Endurance Race in the World, 45km of the World's biggest white-water. 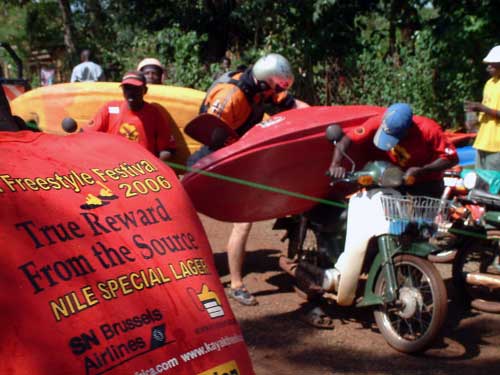 Huge thanks go to our Principal sponsors:

and to our Prize Sponsors: