Much has been said about this small little river. Mostly negative comments and ‘enthusiastic’ accounts of dead animals stuck in trees and memories of upset stomachs. Why would anyone want to even paddle this cess pool? Certainly after hearing the opening statement I’m not sure anyone would want to. Well, let me attempt to dispel a couple of myths and set the record straight over the friend we have had so much fun on over the past few years.

The Klip is one of only a few rivers that run year round. My understanding of the situation is that water gets pumped up from the Vaal Dam to Johannesburg and here it is used in the grey water process. The cleaned water is fed to the Klip which then makes its way back to the Vaal Dam. Hence the reason it can flow all year long. I am not sure on the actual flow rate, maybe 2 or 3 cumecs, but it’s enough to provide us with a small hole that is just so much fun with a couple of mates.

The put-in for the short, and the best section, is the Meyerton sports grounds, ending at the Rothdene caravan park through a distance of roughly 5km. The rapids are all in the class 1 and 2 region and all of them are very straight forward. About 300 meters after the put-in is the first rapid, a small pool and then another tiny rapid. The river goes around a left bend and then moves rather quickly towards a dodgy bridge (dirt road). If you are a total beginner then you should be careful here. This bridge can become blocked up with trees and the swift moving water into it could spell trouble. The portage is river right and there are some very small eddies where one can climb out. At the moment the bridge is open on the left and fully blocked on the right. Last season the bridge got blocked badly and the force of water during summer has caused some damage to it already. 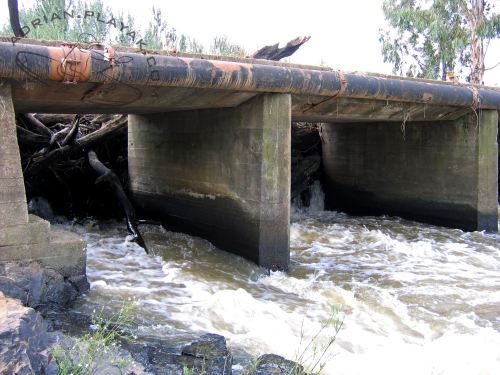 The first bridge which is often blocked with trees. Photo by Adrian Tregoning.

After this is some flat water and then under a proper bridge (tar road) where there is a small rapid. Straight down the middle. This is an excellent spot for beginners to practise ferry glides, peeling in and out of an eddy and also rolling in moving water. It is very deep in the main current and good for all kinds of eddy line moves.

A long flat pool follows this and then a small rapid on a right hand bend and then Pump House rapid is found. There is a nice sticky hole on river left at the top of the rapid but watch out, it is backed up by a large rock so don’t go over. Near the bottom on river right is a wave that you can catch on the fly but really not worth much. There is another small drop and then the entry to Double Drop. There is a broad wave/hole upstream, which you can also catch on the fly, and then the infamous Double Drop.

This rapid consists of two river wide drops, each of about a foot or so with a pool about 3 or 4 meters between the two. River left is stickier than the right and we usually run it right of center, mainly because there is more water here. At high levels this rapid becomes pretty sticky and one should be careful. I have never seen it at very high levels or flood but I believe it forms an awesome green wave. I’ve seen it high enough for the hole about 100 meters downstream to disappear. Depending on levels in is quite fun to surf Double Drop river right of center, at the bottom.

I think the main reason why I ever bother to come and paddle the Klip is the little hole about 100 meters downstream of Double Drop. About three and a half meters broad with eddy service on either side, this little hole is always running. Throughout winter one can come and play here and only after some good rain will you arrive and the hole will either just be a small wave that you can hardly front surf, or it will not even be there. The hole is by no means anything special. It is too shallow to cartwheel in it, although one can set up further back in the foam pile and manage 3 ends if you’re lucky, before you get pulled down to the crease where the bow or stern of your kayak will meet the river bottom with an ankle battered bang.

So, blasting the hole, spins left and right and trying to surf with two people are pretty much the order of the day. Far better than stagnating at home during the winter months, waiting for rain, or between weekends when the typical boater would be hanging around Natal or Mpumalanga. I have spent hours surfing this hole and even though it is considered as terrible by other people, it has taught me so much and I’ll continue to go there. And for the record, I have never been sick from this river. 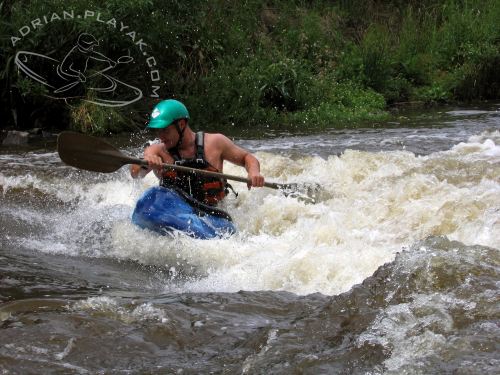 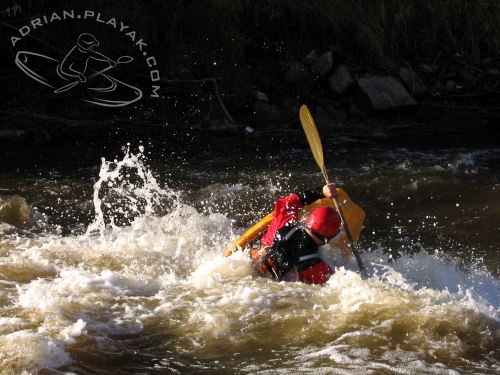 Adrian Tregoning managing an end or two before hitting the bottom. Photo by Carl van Wyk. 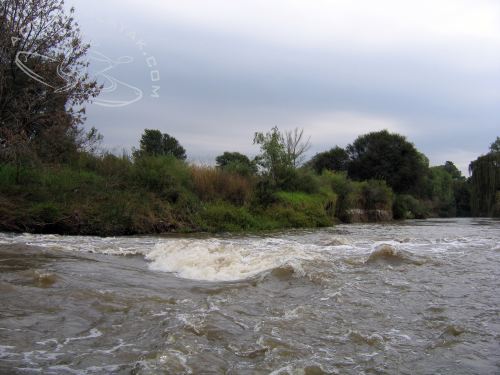 A summer afternoon at the hole. The water is very warm in summer, and ice cold in winter. Photo by Adrian Tregoning.

After the hole, which strangely enough does not have a name, there is a little bit of flat water and then a straight forward rapid with the mighty name of, wait for it, Grave Yard! I always give an emphasis on that name when we come up to it. Maybe it is a little tougher for the guys in K1’s and K2’s because it turns sharp right and if you don’t make it you end up in the trees on river left. Further on are some really small ‘rapids’ and then a longish flat section all the way to the caravan park.

The drop at the caravan park is the highest in the river and a simple chute of about a meter. It is a kind of a weir formed with just a whole lot of boulders dumped into the river with a slot where all the water comes through. It’s possible to surf this drop at all levels but it is not very easy. One mistake and you’re off. It is possible to flat spin but that depends on skill and also water levels. At high levels it is quite fun to surf. At flood levels the entire mass of rocks is covered in water. I have never seen this but would imagine it probably washes out quite a bit. When surfing, be careful, some upstream flips for a mate of mine resulted in two broken blades in about 15 minutes. It’s fairly shallow on surfers’ right but deeper on surfers left where a smallish kind of hole forms. This is the normal take-out. There are braai facilities and bathrooms here too. 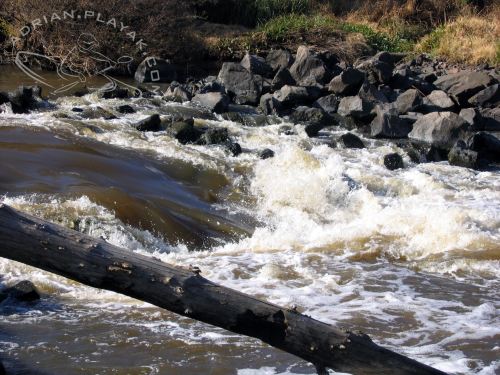 The last drop at the caravan park. Photo by Adrian Tregoning. 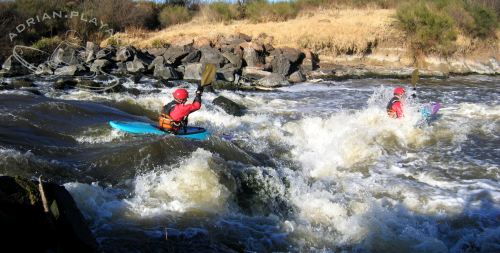 Adrian Tregoning running the final drop. Photos by some ex-girlfriend..

If you’re new to kayaking I highly recommend the Klip, a good river to start on and get the basics wired before you venture onto something else. Or else for anyone else it’s always fun with some friends and not too far from Johannesburg.

The usual put-in is the Meyerton sports grounds and finding it is easy and there is no entrance fee. From the R59 one can take the Johan Le Roux off ramp. Turn left and go through a couple of robots/stop streets for about 2 km. When you reach the robot at the t-junction, turn right. The entrance to the sports ground is within 400 meters of that robot and you’ll turn left.

There are two ways to get to the take-out. One way is to go straight instead of turning left into the sports grounds after the t-junction. Keep going for quite some time passing a set of robots, then a stop street opposite a small shopping center, another stop street and then straight for maybe about 2 kilometers or so. Just after a garage and a Super Save shop is a stop street. Turn left here. If you miss this and go straight you will go down hill and then arrive back at the high way within 200 meters. This is the Verwoed off ramp and then second method to get to the take-out. So after turning left at the stop you go straight, past a stop street in the middle of no where and then left and a t-junction. Go straight and you’re at the Rothdene caravan park. This is the take-out. Here you’ll pay between R20 and R30 per car, depending on how they feel. Tell them how many cars you are leaving there and pay for them. They won’t charge for every car going in just the ones you leave there.

A few kilometers downstream of the Rothdene caravan park is a railway bridge with a small weir underneath it. This becomes a good play wave at very high levels. But watch out, at certain levels it is very dangerous. Just cross the river at the tar bridge (about 800 meters from the put-in) and turn right at the first road. Go straight for quite some time. Eventually, you’ll arrive at a rail road crossing, before you cross, turn right and drive parallel to the rail way and down to the river. It seems a little dodgy to be down there but I reckon in a group you’d be ok. You could also just paddle here from the caravan park. Watch out for a broken bridge, it must be shot on the far right. Other than that the Klip is very flat and boring, but watch out for strainers as they can be a hazard on this river. 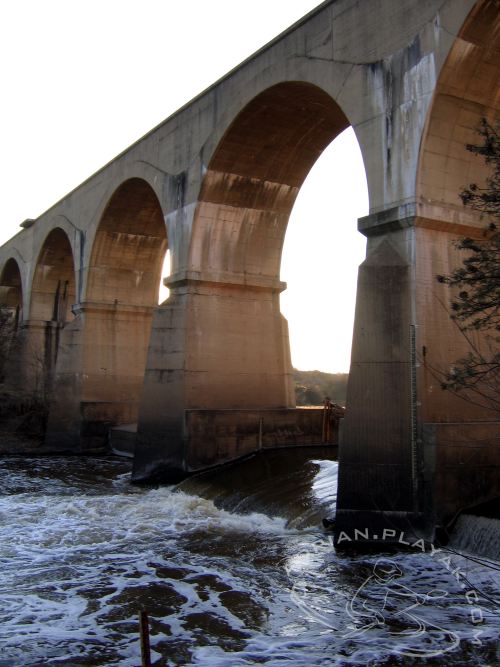 This feature gets really good at high/flood levels I believe. This photo was taken at very low levels. Watch out though, it has almost drowned a few people at certain levels. Photo by Adrian Tregoning.

You’ll find loads of K1 and K2 paddlers in their fibreglass hulks. I’ve paddled this river plenty of times and have never come across any other play boaters. It’s such a shame, paddling this little river taught me so much.